Arizona Isn’t California: Why We Are Better Prepared For Drought We are not seeing such draconian measures in central Arizona, because Arizona leaders have had the foresight to make tough decisions to prevent a water crisis.

Decades ago, we built large reservoirs on the Salt and Verde rivers that can hold a total of 2 million acre-feet, enough for about 5 million households for a year. But even when the reservoirs are full, the Salt River Project doesn't deliver all of the water it can. Instead, it saves supplies for future years, so despite the 15-year drought, Salt and Verde reservoirs are currently about 58 percent full.

While dams and smart management decisions help us to maintain a steady water supply, state laws passed nearly 35 years ago play a critical role in preventing us from suffering like Californians.

In 1977, the Arizona legislature established a commission to write a comprehensive groundwater law for the state. Composed of 25 legislators and governor-appointed members, it was given 3 years and only $450,000 to complete this essential job. 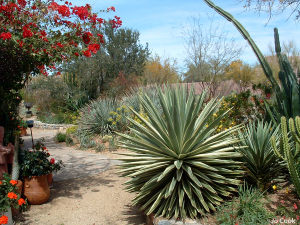 In December of 1978, the California commission issued its final report, which recommended extensive changes to state laws. The report found few fans, was blocked by special interests and produced no reforms. It rained the next year, so no one paid much attention, until now.

Arizona’s legislature and governor, on the other hand, had the grit in 1980 to pass the landmark Groundwater Management Act.   While the Act aims to halt the overuse of the state’s groundwater supplies, its ultimate impact has been even more profound.

Since agriculture uses about 75 percent of our state’s water supplies, the Act prohibits the irrigation of new farmland in the state's most heavily populated areas.   This limitation preserves water for other uses, but also has been good for agriculture, because our farmers are not competing with each other for water.   In central California - where there are no limits on new farmland or how much a farmer may pump - farmers are racing each other to drill ever-deeper wells in search of dwindling groundwater supplies. This over-pumping is causing underground water aquifers to collapse (forever limiting their ability to store water), and the surface of the land is sinking in some places as much as one foot per year. Ironically, Governor Brown’s recent mandatory water use reductions don’t apply to farmers at all.

Arizona’s Groundwater Management Act doesn't just limit new farmland. It requires developers to demonstrate a 100-year assured water supply before lots in new subdivisions may be sold. This groundbreaking provision, unique in the United States, means that new houses cannot be built without water to serve them. It encourages cities to plan for growth and to invest in the infrastructure needed to provide sustainable water supplies to their customers.

Importantly, the Act requires all sectors of the economy to participate in sound water management.   For over three decades, the Arizona Department of Water Resources has adopted mandatory water conservation requirements for all water users—cities, industries and farmers. These entities must also measure their water use and file annual reports. This critical data allows the Department to determine if conservation measures and efforts to reduce groundwater pumping are effective. The Act also puts limits on new well drilling to decrease the impacts of competing wells.

Today, Arizona is reaping the benefits of the Groundwater Management Act as California plays catch-up with desperation laws to limit groundwater pumping that can best be described as too little too late.

But Arizonans are not home free. As desert dwellers, we never will be. We must follow the example of those who led the way by continuing to make difficult choices to ensure water security for our future needs. The health of our society depends on it. New laws will be required, and our governor and legislature will need to act again to meet the conditions of our time. It's up to all Arizona voters to make sure that happens.