The miles and miles of canals that run throughout our Valley are a constant reminder of the significant role they play in our ability to thrive in the desert. While the primary purpose of this vast infrastructure is transporting and delivering water, many areas surrounding the canals also offer some scenic recreational opportunities for residents to walk, run and bike. In addition, they connect communities and neighboring cities. 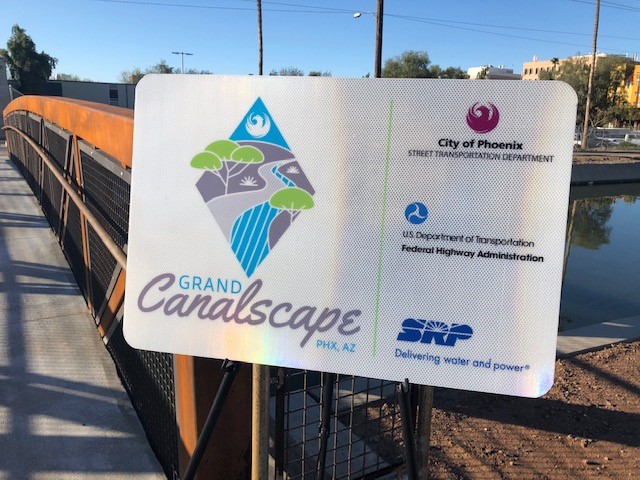 The Grand Canal, which is vital to bringing water to the Valley, is also the oldest remaining pioneer canal on the north side of the Salt River. Now after a major two-phase transformation project, the Grand Canal has become a recreational amenity.

The Grand Canalscape Project features a 12-mile trail that runs from Interstate 17 to the Phoenix/Tempe border. While the primary goal of the project was to develop a safe route for bicycle and pedestrian traffic along the Grand Canal bank, the project also rejuvenated the canals in surrounding communities by incorporating public art, landscaping, pedestrian lighting, new bridges, new connection points into neighborhoods, and signalized crossings at streets for improved safety.

The Grand Canalscape Project’s two phases were completed in November and January. It was done in partnership by the City of Phoenix, Salt River Project Municipal Aesthetics Program and the U.S. Department of Transportation who provided a federal grant for the second phase of the project.

Today, the Phoenix metro area has more than 180 miles of canals, which is more miles of waterways than Venice and Amsterdam combined. The creation of developments such as the Grand Canalscape is a growing trend in the Valley and currently, more than 80 miles of multi-use trails have been developed alongside the canals.

Canalscape began as a concept that would encourage residents to embrace the waterways that give life to the desert and connects the Valley, while also maintaining each community’s uniqueness by involving a combination of urban and nature alongside the canals.

The Grand Canalscape is part of a larger regional trail and crossing project that aims to have a continuous trail between Glendale and Tempe, further connecting communities and deepening the appreciation for the canals and the role they play in our sustainability in the desert.

For over 50 years, the Arizona Municipal Water Users Association has worked to protect our member cities’ ability to provide assured, safe and sustainable water supplies to their communities. For more water information visit www.amwua.org.