Does Anyone Want To Drive On An Ugly Freeway? Remember the first time you saw Phoenix? If you weren't born here, you most likely flew in and then drove down a freeway. The desert landscaping that lines our freeways is one of those cultural distinctions that make new arrivals think: We're not in Kansas anymore.

But palo verde, ironwood and mesquite trees weren't always what visitors saw along the Phoenix Metropolitan Area's freeways. The Valley's first freeway, I-17, was lined with concrete slopes. In the 1970s, landscaping along U.S. 60 included a thin layer of Bermuda grass kept green with rotating sprinklers. Shrubs were watered by hand. California freeways, not the Sonoran Desert, drove the esthetic. 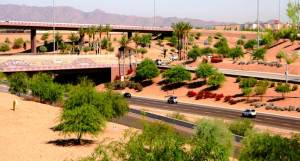 That changed in 1974 when the Arizona Department of Transportation hired native plant enthusiast LeRoy Brady as its Chief Landscape Architect. ADOT began experimenting with drip irrigation systems at its research nursery and testing desert-adapted trees and shrubs along new sections of U.S. 60.

Each mile of freeway requires 40 to 60 acres of landscaping. ADOT’s growing demand for drought-tolerant trees and shrubs began to reshape the inventory of local wholesale nurseries eager for contracts.

It’s taken decades of trial and error to develop the Valley’s freeway landscaping. For example, drip irrigation could not keep honey locust and ash trees alive. Indigo bush and groundcovers, such as trailing acacia and trailing dalea, required too much maintenance. Hop seed bush couldn’t survive the constant turbulence of rushing traffic and the heat radiating off the asphalt.

By 1986, ADOT had adopted an automated irrigation drip system for freeways throughout the Phoenix and Tucson areas. A year later, the Department of Water Resources required any landscaping in public medians and rights-of-way to use approved low-water use plants. (Grass remained on the older parts of US 60 until the early 1990’s when the freeway was widened.)

Cities provide water for the sections of freeway that are within their boundaries and cities want those roadways to be attractive and water efficient. For decades, ADOT has worked closely with Valley cities to create the most beauty using the least amount of water. The City of Mesa tracked freeway water use between 1996 and 2004. Thanks to the joint work of ADOT and city staff, water used per mile of freeway dropped by 73 percent during those years.

After I-17’s concrete banks, there was never any consideration given to not landscaping freeways. A sustainable landscape prevents erosion on the steep slopes and stops invasive plant species, such as tumbleweed and buffelgrass, from taking hold. The landscaping also serves as a green billboard advertising the beauty and possibilities of desert trees and plants for yards. 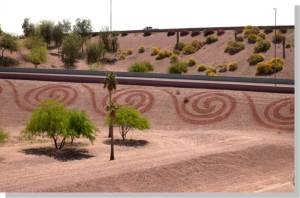 LeRoy Brady is one of those quiet champions that had the patience to slowly help grow the Valley’s culture of conservation. He served as president of Arizona Native Plant Society in late 1980s. His department is also responsible for creating the wall art that serves as a backdrop for much of ADOT’s freeway landscaping.

And one more fact about LeRoy: 41 years after his arrival he remains ADOT’s Chief Landscape Architect. He still drives down the freeway thinking about how a section of landscaping could be designed better or look prettier.

“Does anyone want to drive on an ugly freeway?” he asked.