Drab to Fab: Watch And Learn From This Backyard Makeover Lisa Osborne and her husband bought their City of Avondale home in 2008. They planted two citrus trees in the backyard that sat in a field of gravel for years and proceeded to turn brown. Until last November, the backyard had not changed. The economic downturn and family responsibilities left the yard to become what Lisa called the dog's den, since their dog Abby was the only family member who found a good purpose for it. Today, Lisa's backyard is filled with flowering shrubs, lovely cactus and desert shade trees surrounding an extension of her patio where guests sit around a fire pit in bright red chairs. Lisa was the first winner of the Drab to Fab Backyard Rehab contest, randomly selected from nearly 11,000 entries from Phoenix Metro area homeowners. The prize was a backyard makeover valued at $8,000.

The contest was created by Water – Use It Wisely, a water conservation awareness campaign started by the City of Mesa in 1999 to help Arizona residents understand easy ways to save water. The new organization quickly invited partners to join and help fund the campaign. Water – Use It Wisely now has 19 Arizona partners, including AMWUA, the cities of Phoenix and Scottsdale among other cities, private utilities, Central Arizona Project, Salt River Project and the Arizona Department of Water Resources.

Water - Use It Wisely maintains an informative website and distributes a monthly newsletter featuring a weekly blog post that has 21,000 subscribers. The partners work with a professional public relations agency to keep the campaign fresh and to buy media time during the spring and the fall prime planting seasons. Drab to Fab Backyard Rehab isn’t Water – Use It Wisely’s first contest. The campaign has sponsored photo contests and children’s contests and worked closely with local television news stations to promote them. The Drab to Fab Backyard Rehab contest is the organization’s most ambitious – and most successful - contest. The contest was so successful that Water – Use It Wisely held another Drab To Fab contest this year. A City of Tempe homeowner won this year’s makeover.

The contest’s first winner hadn’t completely ignored her Avondale backyard. In recent years, Lisa met with a few landscape companies to talk about improvements. While they were willing to do the labor, the companies left the task of designing the yard to Lisa, a task she found overwhelming. One morning in April 2016, Lisa was home later than usual and watching the morning news. She saw an ad about a contest for a backyard makeover and she entered. A few months later she received a call about winning the Drab to Fab Backyard Rehab contest. Lisa didn’t remember entering a contest and assumed it was a scam. The contest representative on the other end of the call gave her a phone number to call back once Lisa did her own investigating. 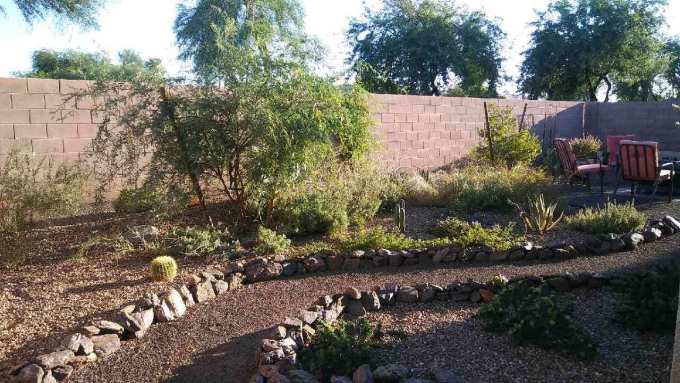 Soon Lisa had the professional help she needed. She started with a copy of Landscape Plants for the Arizona Desert, an AMWUA booklet first published in 1991 and expanded in 2003. (The booklet also is a mobile website offering detailed information about 200 trees, shrubs, vines, succulents and cactus.) A landscape architect took Lisa to the Scottsdale Xeriscape Garden, a demonstration garden in Chaparral Park, where she could see and choose the trees and plants for the shady and colorful back yard she had always imagined. Her goal was to have color throughout the year and to attract butterflies and hummingbirds. The architect knew where to place the trees and shrubs, the walking paths and an extended patio for more seating. Irrigation experts helped Lisa to understand her irrigation control box and watering system and a landscape contractor helped her select the stones and pavers for the yard’s paths and patio. The landscape contractor also oversaw the crew that implemented the plan within two weeks in November. Lisa built three raised gardens for vegetables and herbs and landscapers brought drip lines to each of the garden beds.

The best part about a backyard makeover is watching it happen and getting ideas for your own yard. Considering the thousands of people who entered but didn’t win, Water – Use It Wisely documented the Drab to Fab Backyard Rehab in a 10-part step-by-step video series. The videos come with additional tips and resources to help you imagine, plan, plant and maintain a new back yard of your own. The Water – Use It Wisely backyard rehab contest was so far-reaching and successful that it is a finalist for a 2017 Arizona Forward Environmental Excellence Award. The winner will be announced Sept. 23. 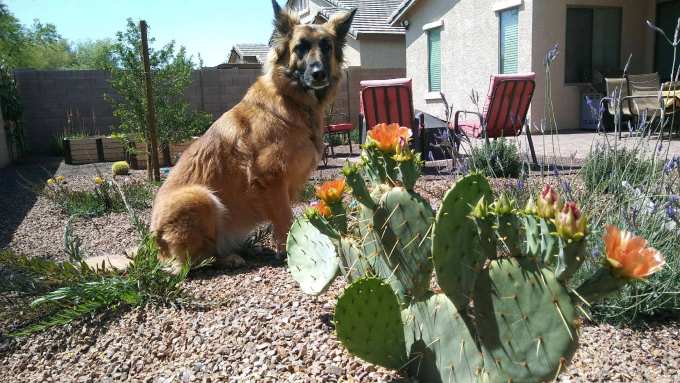 Lisa now meets regularly with family and friends to party in her backyard where she and her husband installed a fire pit, added new furniture and set up a gas grill. She said it’s like having another room in the house. Among the backyard guests is Harriet the Hummingbird, who built a nest in one of Lisa’s new trees this spring. Abby doesn’t seem to mind sharing the space that was once only for her.  The new backyard includes a dog path designed just so Abby can continue her daily patrols around the perimeter unimpeded.