How To Save Water With 416 Acres Of Grass If you want to find out how to save water and keep a little grass in the back yard, how about asking a city with more than 400 acres of Bermuda to care for? The City of Scottsdale maintains 42 parks that include about 416 acres of grass. Six of the city's largest parks are strung along Indian Bend Wash, an eleven-mile green belt that cuts through the heart of Scottsdale.

Indian Bend Wash is a community playground, but its first purpose is flood control. The wash moves and controls storm water to protect homes and businesses during heavy rains. The project was once envisioned as a concrete channel, but Scottsdale and the U.S. Corps of Engineers came together to build a green option.

The wash includes seven levies, is built using rainwater-harvesting techniques, and carries the outflow from surrounding storm water drains into the Salt River bottom. Grass and trees stabilize the ground in the wash, so it is not carried away during heavy storms and runoff.

Indian Bend Wash is home to a sophisticated weather station that indicates how much water the soil, grass, trees, and plants have lost during the day. The technology helps park supervisors know exactly how much water to apply to keep their parks thriving. That’s important because all park supervisors are given water budgets for the year that they are expected to meet or beat.

Here’s how that budget is determined: The Arizona Department of Water Resources regulates the maximum amount of water a city, a business or an HOA can use per acre of turf. The regulation applies to any area that has 10 or more acres of grass. Only eight of Scottsdale’s parks have 10 or more acres of turf, but that doesn’t matter to Scottsdale leaders. They beat the regulation for all of the city's parks.

In 2001, the Scottsdale Parks and Recreation Department made it a goal to use 15 percent less water than allowed by the state’s regulation on turf in all 42 of the city’s parks. The city has an irrigation manager dedicated to accomplishing that goal. Here are six additional ways the city controls the amount of water used on its grass. These measures can help you with your lawn, too. 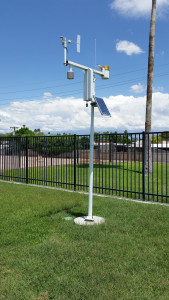 1. Watch for leaks. A central irrigation control system automatically shuts down when it senses a break in a park’s line or control valve. Before the installation of the technology, a line could waste water for hours before being spotted by a park worker or reported by a citizen.

4. Don’t overseed in the winter. The city does not plant winter grass in most parks. The Bermuda grass goes brown during the cooler months. It is still alive but dormant. The exceptions are Scottsdale Stadium and Indian School Park used by spring training teams, parts of Civic Center Mall used for community events, and the plaza area of McCormick Railroad Park.

4. Shrink the lawn. The city has converted some grass to drought-tolerant landscape in areas that make sense for the community surrounding the park. To date, Scottsdale has replaced 323,618-square-feet of grass with drought-tolerant gardens.

5. Understand the irrigation system. All park staff members are trained in water management and irrigation maintenance.

Scottsdale measures its success by comparing the water it uses to irrigate its parks to the amount allowed by the Arizona Department of Water Resources. Between 2001 and 2014, the city used 2 billion gallons less than the state allows, a savings to the city of $3.7 million.

Cities offer free workshops for homeowners who need to brush up on irrigation basics. Not the way you want to spend your evening? Hire a landscaper who has completed professional training and certification. A good place to start is with Smartscape professionals.