Inside Job: Water Efficiency A Fixture In City Buildings What may be less obvious are the improvements the cities have made inside the facilities they maintain. For decades, cities have taken the lead on adopting water efficient fixtures and practices inside their public buildings. The City of Glendale, Arizona, was the first major U.S. city to adopt a code requiring water efficient fixtures.  The ordinance took effect January 1, 1988. It applied to all new construction, as well as replacement of fixtures in existing structures.  Many of the Valley cities adopted similar ordinances in the years following. The federal government adopted water efficiency standards for fixtures in 1992. At the same time, cities began converting to more efficient fixtures inside their own facilities.

Cities continue to evaluate how they can further improve water efficiency inside their public buildings. The EPA WaterSense Program is a voluntary labeling program that promotes fixtures that are 20 percent more efficient than the federal standard. Thanks to the EPA WaterSense Program the market offers a growing number of increasingly efficient fixtures. Cities are once again upgrading.

The Town of Gilbert is retrofitting its public buildings with more water efficient toilets, urinals, showerheads and faucets. Gilbert has done work inside its courts building and two municipal office buildings, two fire stations and the fire administration building, three recreation centers and one library.

Here are the fixtures Gilbert has installed:

Prior to the conversion, the town's urinals used 1 gallon-per flush, the current federal standard. The town was able to cut in half the amount of water used by the urinals without purchasing and installing new fixtures. It simply replaced the urinals’ diaphragms. 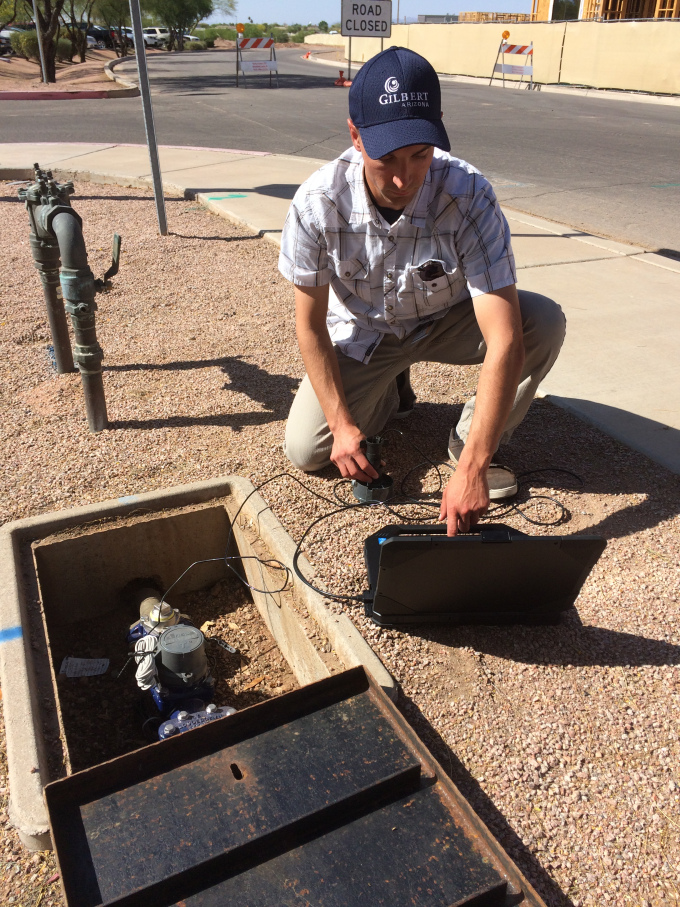 When Gilbert’s conservation professionals crunch the numbers from the latest indoor plumbing upgrades, they project an annual savings of more than 1.6 million gallons of water and $6,000 in reduced water and sewer bills. (Yes, cities and towns must pay water and sewer bills, too.) The work in Gilbert is really just beginning. Water efficient upgrades still need to be made to 12 additional public facilities, including eight fire stations.

In 2011 the City of Scottsdale Council voted to focus on converting toilets installed in City Hall, North Corp Yard, Scottsdale Stadium, Civic Center, Mustang Library and Scottsdale Center for the Arts. The 1.6 gallon-per-flush (the federal standard) toilets will be replaced by more efficient 1.28 gallons-per-flush toilets as money becomes available. Compare that to the old 1980s toilets that used 5 gallons-per-flush or more. That’s a 74 percent reduction in water use.

For the past three years, Scottsdale also has reused 1.9 million gallons of what is known as “blowdown water” annually from its municipal buildings’ evaporative coolers. This wastewater would normally be discarded directly to the sewers, but it now replaces potable water used for fire truck testing in the North Corp Yard.

Other cities are finding additional savings in their facilities. The City of Glendale just finished an inventory of two libraries, two community centers and a fire station documenting the types of fixtures currently installed and making note of leaking toilets and missing faucet aerators. The city will continue to inventory buildings to prioritize water-saving changes. The City of Avondale is beginning a similar inventory of appliances and fixtures this year, and the City of Phoenix recently completed an extensive facility inventory. More water-efficient plumbing will be installed as cities remodel older buildings or as old fixtures and appliances break. New city buildings will be fitted with more water-efficient plumbing, such as a new City of Tempe fire station.

If you’re stuck inside during the summer, it’s a great time to inventory your own interior for ways to save water. Adding aerators to your faucets is an easy way to save water and money. Consider replacing older toilets, which can use as much as 6 gallons of water per flush and are prone to silent, continual leaks. See if your city offers rebates to help offset the cost of replacement, and look for the WaterSense label when you make your purchase. The label ensures fixtures are more efficient and that they meet strict performance guidelines.