Keeping It In Perspective: Bottled Water And Other Industries Recently, Phoenix announced a water-bottling plant was opening in a vacant warehouse on the city's west side. The plant reportedly will bottle about 35 million gallons of Phoenix tap water a year and employ 40 to 50 people. To many people - and for many reasons - a water-bottling plant in a desert city seems like a bad fit. Some people question how this Valley can support manufacturers and industries that require ample amounts of water to do business, such as biotech, data centers or breweries. While we applaud activism, here are four points that may better inform all of us who care about water and the economy.

One: Every city needs to grow within its water supplies and that is what all AMWUA cities are doing. Millions of gallons of water may seem like a large water-use business, but it is small compared to each city’s water supply. Consider this: Phoenix’s annual water supply is 100 billion gallons and 66 percent of the city’s customers are residential. Only a third of Phoenix’s customers are non-residential, meaning they are hospitals or restaurants, churches, schools or manufacturers - or water bottling plants. Both residents and businesses have taken steps to use water efficiently and continue to look for more opportunities to conserve. Phoenix reports that while its population and gross domestic product rose from 2007 to 2015, water use in the city declined by 17 billion gallons. Arizona’s population has grown steadily since 1957, but the volume of water we use today is about the same as it was in 1957. That’s because Arizona, including AMWUA cities, invested in conservation programs, infrastructure and water recycling. We have a conservation culture in Arizona, especially here in Maricopa County. 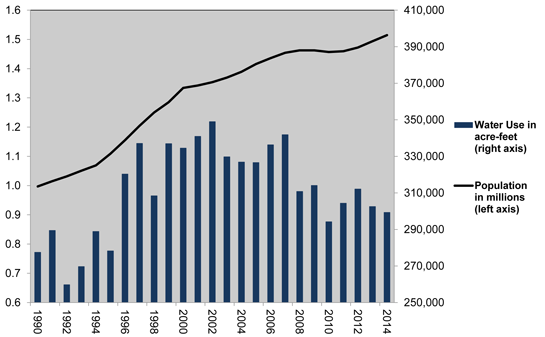 City of Phoenix: Water Use vs Population Growth

Two: A 16-year drought, a looming water shortage on the Colorado River and the uncertainty of climate change make every drop of water precious. We agree. But it takes water to manufacture all of the commercial goods and food that each of us either needs or wants. (In Arizona, 74 percent of water is used in agriculture to grow food for consumers and animal feed, in this country and outside of this country.) It takes water to operate a hospital or resort, conduct biomedical research or to manufacture various products we use daily. Consider these numbers from the 2012 Beverage Industry Environmental Roundtable: It takes about 1.4 liters of water to bottle 1 liter of water (including the liter for drinking) and 4 liters of water to bottle 1 liter of beer. We are back to the old adage that whiskey (or beer) is for drinking and water is for fighting, especially considering the number of breweries throughout Maricopa County.  So then comes the very personal and tricky math: what product is worth the expenditure of water, how much water is that product worth, and who makes that decision? Most of the time, it’s left up to the consumer.  The good news is consumers have choices because the Valley’s robust water portfolios can support diverse businesses.

Three: Paying for drinking water in plastic bottles is an environmentally unsound practice. We hear you. Paying for bottled water baffles many water professionals because they work so hard to provide safe, good tasting, and very low-cost water to their customers’ taps. The best conservationists among us drink only tap water and carry refillable containers. Other people buy bottled water and refill the plastic bottle with tap water several times before throwing it in a recycling bin. Many people drink nothing but bottled water. The inescapable fact is that bottled water is a well-marketed industry and it’s growing. No matter where you stand on bottled versus tap, people in this country – including those living in Arizona  - want and use bottled water. Here are a few numbers from the International Bottled Water Association about the demand for bottled water in the United States.

Bottled water consumption in the United States will soon outstrip soda consumption. While this makes healthy eating advocates happy, it also raises environmental questions.  For example, is it better to reduce the carbon footprint of distributing bottled water locally or from Fiji?

Four: There is an issue called “optics.” Some people worry that opening a water bottling plant in a desert city simply looks bad and muddles the message to customers to use water more efficiently in their homes and yards. Here’s another message that Phoenix and all the AMWUA cities want to send: Large and small businesses are welcome and this region has a secure and resilient water supply that calculates the need for new businesses to thrive and expand. The Phoenix metropolitan area wants to be the choice for diverse and growing industries, such as healthcare and biomedical research, manufacturing, aerospace and aviation, and emerging technologies. The Valley cities can welcome all types of economic development and our economy is growing because cities wisely manage their water supplies. Cities’ supplies can support large industrial water users as well as their residents. The AMWUA cities also have created policies that build strong economies that won’t outstrip their resources, including energy and water. These policies protect residents, as well as provide new jobs and a solid tax base for services and amenities that make our cities livable, such as police and firefighters, parks, free concerts and firework displays.

The recent debate about water and industry enlivens concern about water, and that’s a good thing. It moves people to action. We need people willing to protect and advance Arizona’s leadership in policies that protect our water supplies, such as the 1980 Arizona Groundwater Management Act. But now you have the facts should concerns about industrial water use come up for discussion at work, at an HOA meeting, or at your next backyard barbecue. And about that barbecue, will there be bottled beer or bottled water in your ice chests for your guests - or a little of both?