The Salt and Verde rivers are two of the hardest working rivers in the United States.Traveling through Arizona's northern high country and onto the desert plains, the Salt and Verde provide more than half of the AMWUA cities' water supply. On November 15th, Phoenix Mayor Greg Stanton and Clarkdale Mayor Doug Van Gausig convened a meeting of mayors, councilmembers, city staffs and business leaders from Central and Northern Arizona to discuss how to keep the Salt and Verde healthy for the benefit of all their communities. This is another example of collaborative efforts to protect the rivers from the threats of fire and drought.

Thanks to the foresight of Valley landowners that formed the Salt River Project (SRP), the Salt and Verde rivers flow into SRP's system of man-made lakes and reservoirs.  Water from the Salt and Verde is then distributed to homes and businesses in the Phoenix Metro area through canals operated by SRP.

Communities, businesses and environmental groups recognize that the forests, tributaries and groundwater that feed the Salt and Verde rivers are in the midst of a 20-year drought and water flowing in the two rivers has decreased by 35 percent. In the last 15 years, raging wildfires also have burned nearly 2 million acres of northern Arizona’s forests, where waters that keep the rivers flowing originate. These catastrophic wildfires cost the state hundreds of millions of dollars in fire suppression and economic development. Wildfires also leave behind a thick layer of sterile soil that washes into the Salt and Verde rivers and settles into reservoirs. The sediment makes the water delivered by SRP more difficult and expensive for cities to treat for drinking water. 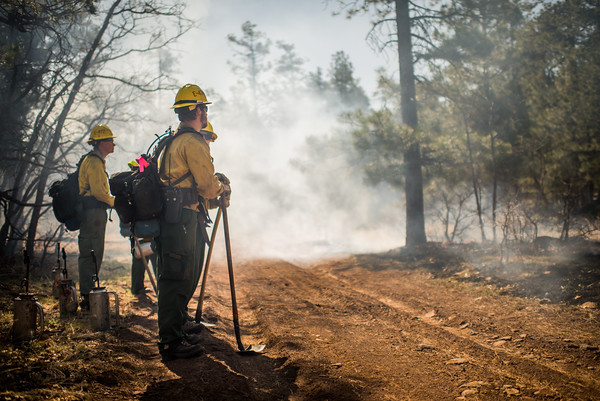 The first collaborative effort to address the stresses placed on the Salt and Verde rivers is the Northern Arizona Forest Fund.  Several AMWUA cities are contributing to the Forest Fund, which was spearheaded by SRP. The money is spent on forest thinning projects to protect the watershed.

Now the environmental group The Nature Conservancy has joined the effort to keep more water in the Salt and Verde rivers and ensure the quality and quantity of the Phoenix Metro area’s water supply. The Salt and Verde Rivers Water Fund aims to raise $7 million in the next three years to fund projects that protect these rivers for the communities in the Verde Valley and in the Phoenix Valley.  These projects include helping farmers along the rivers change to less water-intensive crops and to pay for automatic gates to make aging irrigation systems more efficient. The gates allow farmers to electronically control irrigation gates so just the right amount of water flows into irrigation channels to ensure crops thrive. Other projects under the Salt and Verde Rivers Water Fund could include thinning the forests to reduce the likelihood of catastrophic wildfires and protect the watershed.

Like any successful water management plan the new Water Fund relies on collaboration. At the meeting on November 15th, leaders from both the Valley and Northern Arizona discussed the state of the Salt and Verde, as well as how the Salt and Verde Rivers Water Fund could benefit users in both regions of the state. The meeting produced three key takeaways:

The Salt and Verde Rivers Water Fund along with the Northern Arizona Forest Fund provide new avenues for cities in the Phoenix Valley and the Verde Valley to partner with environmental groups, businesses and farmers to protect and enhance Arizona’s water supplies at the source—high in Arizona’s forests and along its precious rivers.