This month, former Senator Jon Kyl told a gathering of elected officials and water professionals that Arizona's past water successes had one thing in common: the willingness of competing forces to compromise for the good of the state. Now, Senator Kyl said, it is time we do it again.

Senator Kyl is a water lawyer who represented Arizona's citizens for 25 years, first in the U.S. House and then the Senate. He was the guest of honor at an Arizona Water Reception, which brought together state legislators, mayors, city council members and others to highlight the importance of water issues for state leaders. The reception was held in downtown Phoenix and hosted by AMWUA with the help of nine sponsors.

Arizona’s legacy of resolving difficult water issues offers a template to help solve today’s challenges, Senator Kyl said. Speaking of this tradition, he said that by “ making compromises for the good of the state - in a non-partisan way - we avoided those challenges becoming crises.” He pointed out some examples of compromises that solved big water challenges for Arizona.

Among the most pressing unresolved issues facing the state right now are falling water tables in some rural communities, Senator Kyl said. The Groundwater Management Act does not regulate groundwater pumping  in rural areas of the state as tightly as it does in urban areas.  Now, conflicts are brewing in many rural communities over new wells and decreasing water levels in underground aquifers. 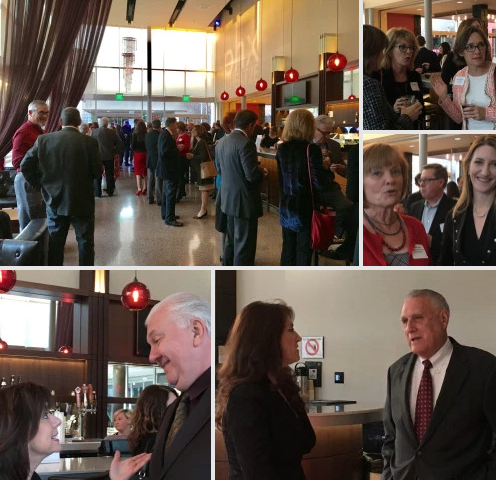 The state must also resolve the question of who has the right to use the state’s surface water supplies.  This seemingly simple question has been the source of litigation in the state for the last 40 years in a complex court case involving tens of thousands of parties in what is known as the “General Stream Adjudication.” This case complicates Arizona water policy because it makes it nearly impossible for thousands of water users to have legal assurance regarding their water rights.

In the context of his remarks about eventually resolving the General Stream Adjudication, Senator Kyl said that in the course of his public service he has learned that proposed solutions do not last if there are winners and losers. All sides must win at least 80 percent of what they want to create a successful and lasting resolution. When it comes to resolving the General Stream Adjudication, that may mean finding additional sources of water through augmentation and recognizing the impact of the Adjudication on small water users, Senator Kyl said.

Solutions to these complex problems depend on data collection, analysis and oversight by the Arizona Department of Water Resources (ADWR). Speaking to Legislators in the audience about the importance of ADWR, Senator Kyl said: “Whatever they need, make sure they have it because their technical work is essential to the resolution of all these disputes.” He also remarked that in his view, ADWR is the number one economic development agency of the state. He observed that investors and businesses want to invest in a community that has a firm water supply in place.

Senator Kyl said he is optimistic that Arizona’s leaders will come together to overcome these and other water-related challenges.  This is particularly the case when he sees so many of Arizona’s leaders knowledgeable about water and eager to learn. “The thing is you got to have an open mind and you’re going to have to really think things through,” he told the gathering. “You have to have a sense of destiny in that these are big problems for the future of the state.”

The Arizona Water Reception was another step toward bringing leaders together who can solve these big problems. Now, it’s everyone’s responsibility to keep elected officials working on solutions for the common good, so our grandchildren and their children, will know we also had the will to act – and to compromise - on their behalf.