Baseball players and fans want to see spring training fields covered in bright green grass ready to play ball. That means a host city must dedicate water to keep the grass green and irrigate the fields as efficiently as possible.

Last year, the City of Goodyear began receiving irrigation water for its spring training complex from an unlikely source: a Superfund site at the Phoenix Goodyear Airport. A Superfund site is a polluted area requiring long-term clean up of contaminants and is overseen by State and Federal agencies. Water & Waste Digest magazine recognized Goodyear’s unlikely and successful partnership with the Superfund site manager as one of its 2015 Top 10 Projects from across the United States.  Here’s how the partnership works.

In 2004, the City of Goodyear built the 105-acre sports complex to host the Cleveland and Cincinnati baseball teams. Goodyear needs 250 acre-feet of water a year to keep grass lush for an exhibition ballpark and 16 practice fields. (One acre-foot is enough to serve three average Arizona households for a year.)

Since the early 1990s, the Goodyear Tire and Rubber Co. has been containing and cleaning an underground plume of contaminated water at the airport. The company has another 20 years of cleanup at the Superfund site ahead of it. About half of the cleaned or "remediated" water is pumped back underground to help contain and shrink the plume, leaving more than 800 acre-feet of remediated water available each year. Goodyear had a 105-acre sports complex to irrigate. So, the city and the company put together a deal.

The City of Goodyear gave the manager of the Superfund site access to city property and an easier permitting process for such things as pumps, wells and storage space that it needed for the clean up. 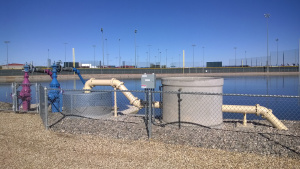 In exchange, the Goodyear Tire and Rubber Co. spent $1.3 million to build a 1.5-mile underground pipe to the east side of the Goodyear Ball Park. The City of Goodyear spent $350,000 to build the infrastructure to convey the remediated water to a reservoir for the ballpark complex. The new system was ready for last year’s spring baseball season.

The free water saves Goodyear $250,000 each year on its water bill (yes, cities are billed, too), money that now can remain part of the general fund and be distributed to other projects. The free water saves another $65,000 to $75,000 because the City doesn’t have to pump groundwater to meet the needs of the ballpark and then pay to replenish that groundwater, as required by law. The City’s part of the infrastructure had just about paid for itself by the end of 2015. 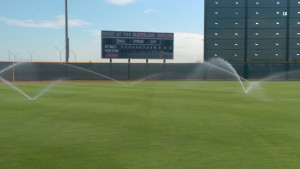 That should be the end of a great story, but there are a few more things you should know. The remediated water is less salty than the treated wastewater or  “reclaimed” water the City used to irrigate the park before 2015, which means healthier grass for baseball players and fans. The reclaimed water Goodyear once used to irrigate the ballpark can be stored underground to shore up the City’s water resources. The remainder of the 800 acre-feet of remediated water created by the Superfund site is channeled to the Buckeye Irrigation System where farmers use it for free.

It’s a good story and maybe one to share on a spring afternoon watching a baseball game.