Arizona: Where Flushing Keeps The Lights On 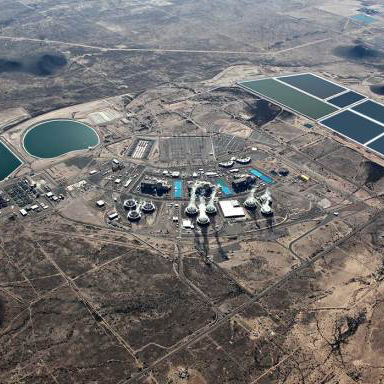 Arizona has a reputation for crazy ideas. Sometimes those crazy ideas are just crazy and sometimes they turn into marvels.

Take, for example, this crazy idea from 1969: Arizona knew a population boom was coming and it didn't have enough power for the number of people and industries on their way. That's when Arizona Public Service first started talking about building a nuclear power plant in the middle of a desert.

One thing everyone knows about a nuclear power plant is that it needs copious and steady amounts of water.

This desert nuclear plant would need 110,000 gallons of ultra-pure water inside the reactor at all times. That could be satisfied with groundwater, formerly used by farmers on the 4,000 acres where the plant would be located. The groundwater could be treated to an ultra-pure state at the site. But that was only part of the problem solved.

The envisioned plant also would need 560,000 gallons of water circulating through each of the three cooling condensers at all times and a steady flow of up to 90 million gallons of water a day to keep the cooling towers operating. Crazy problem?

Here’s the crazy solution: The water you send down your toilets, showers, sinks, dishwashers, and clothes washers. Back then, cities considered wastewater a nuisance to be treated and disposed of quickly, mostly into dry riverbeds. Suddenly, a group of energy investors wanted to pay cities $20 to $30 an acre-foot for the stuff. (One acre-foot is enough water to serve three Arizona families for a year.)

In 1973, AMWUA negotiated an agreement with APS on behalf of its five original members: Phoenix, Glendale, Mesa, Scottsdale and Tempe. The cities agreed to ship treated effluent 36 miles west from the new 91st Avenue Wastewater Treatment plant in Phoenix to the nuclear plant through reinforced concrete pipe, most 8 feet in diameter. Gravity would power the water through most of the pipe and it would be re-treated on site.

Palo Verde remains the only nuclear plant cooled with effluent, but that’s going to change. As water becomes more precious, water and power managers from around the world suddenly are interested in this plant in the middle of nowhere. Palo Verde administrators are busy touring international guests and are in demand at international conferences to talk about this marvel. Sometimes it’s hard to tell the difference between a crazy idea and innovation.