CAP: Tracking The Flow Of Colorado River Water To Your City

In 1973, the U.S. Bureau of Reclamation broke ground at Lake Havasu for an engineering wonder that would carry an average of 1.5 million acre-feet of Colorado River water each year across Arizona to Phoenix and on to Tucson. One acre-foot of water is enough to serve three average Arizona households for a year.

Water finally flowed to Tucson in 1992 and the following year the federal government handed over operations of the completed canal to the state. It is commonly known as Central Arizona Project or CAP. CAP remains a vague notion to many city dwellers and is prone to misconceptions. Below are some questions we hear often and the answers that will make you look like an expert.

Question: I’m not sure that I’ve ever seen the Central Arizona Project. What does it look like?

Answer: The CAP has 336 miles of fenced canal or aqueduct. The canal begins at Lake Havasu and runs east to Lake Pleasant. It then turns south, skirting the eastern edge of the Phoenix Metropolitan Area, runs through Pinal County and ends 14 miles south of Tucson. Most of the canal is dug into the ground. Due to the geography in certain areas, the canal is built on top of the ground with reinforced concrete and earthen walls. The 8 miles of the canal that run through the City of Tucson are underground.

Question: It isn’t all down hill from Lake Havasu to Tucson, so how does the water get where it is expected to go?

Answer: The CAP uses gravity where it can. There are 14 pumping plants, also called lift stations, used to lift the water up when necessary so it can then continue to flow by gravity over the natural terrain. Water is heavy and lifting water uphill requires a great deal of power. The first lift is the largest. It takes six 60,000-horsepower pumps to lift the water nearly 825 feet out of Lake Havasu into the CAP canal. The average lift of other pumping plants is 150 feet.

Question: Wow, where does all that power come from?

Question: So my city uses CAP water. Who else uses it?

Answer: The CAP carries and delivers water to cities, industries, agricultural irrigation districts, and Native American communities that have contracts for that water.  The Central Arizona Project also stores water underground for future use. This year, the Central Arizona Project marked the 30th anniversary of its first water delivery. It was to the Harquahala Valley Irrigation District about 136 miles southeast of Lake Havasu.

Question: You’re talking about a lot of infrastructure. Has it ever failed?

Answer: Yes, once. In 2012, there was a blowout in a remote western section of a canal wall that was above ground. Since that time, each of the walled sections of the canal is examined regularly and reinforced where necessary.

Question: Wow. I never knew that happened. Why didn’t my faucet dry up?

2.     Colorado River water is only a portion of your city’s water portfolio. Most AMWUA member cities also receive water from the Salt and Verde rivers through the Salt River Project canals that crisscross the Valley. Your city also uses treated wastewater and a small amount of groundwater.

Question: How do you keep an eye on a system that stretches across a state? 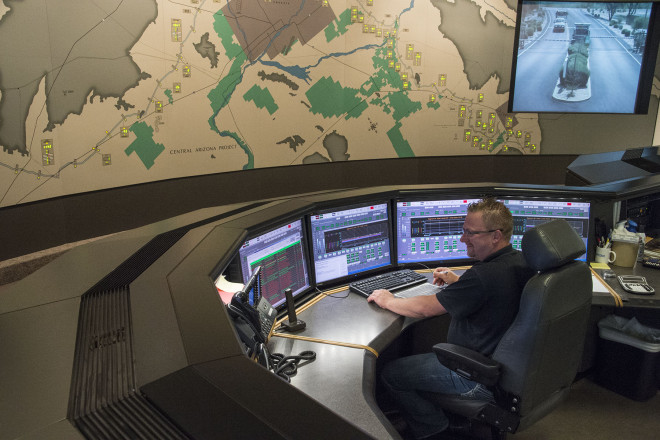 Photo by Philip A. Fortnam

Answer: Employees watch over the CAP system from its north Phoenix control room 24 hours a day, seven days a week. The control room has what looks like an electronic map the size of an entire wall. Employees, sitting behind computers, monitor where and how much water is being pumped to customers at any time of day. Half of the CAP’s 450 employees work at its Phoenix headquarters and half work on the canal and at pumping plants.

Question: This sounds like a big, expensive project. Did Arizona taxpayers foot the bill?

Answer: The system cost the federal government about $4 billion to build. According to an agreement signed with the federal government, the Central Arizona Project is responsible for paying back $1.65 billon over 50 years. The CAP has repaid $1.16 billion of which $462 million is principal of the loan.

Question: CAP water travels through a lot of arid country. Couldn’t we save a lot of water from evaporating if we covered the canal?

Answer: The canals lose about 1 percent of the system’s flow, or 16,000 acre-feet a year, to evaporation because the water is cold and moves constantly and quickly. The cost of covering the canal exceeds the gain. According to the CAP, the idea of covering the canals with solar panels has hit two main snags: the panels block maintenance work and there is not yet infrastructure in its remote locations to capture solar-generated electricity.

Question: This project is pretty important. I have more questions.