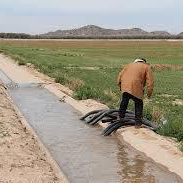 The cities of Mesa and Chandler provide the Gila River Indian Community with reclaimed water to irrigate its growing farm industry.

In exchange, the Gila River community gives Mesa and Chandler a portion of its Colorado River water that the cities can use for their customers’ drinking water.

This smart and mutually beneficial exchange was part of a 2004 settlement of water rights that was a long time in the making. The settlement required 34 water users to negotiate a complicated agreement. The water users included the Gila River Indian Community, south of the Valley, many Valley cities, irrigation districts, and mines.

Reclaimed water is wastewater from homes and businesses that has been treated to high standards for reuse. AMWUA member cities treat and reuse nearly 100 percent of their reclaimed water. Cities can store it underground for future use, send it to industries, or deliver it to irrigate parks, commercial landscaping or crops. Using reclaimed water saves drinking water for our faucets.

For every 1 gallon of reclaimed water Mesa sends to the Community, Mesa receives .8 gallon of the Community’s Colorado River water, which is delivered to Mesa by the Central Arizona Project.

The exchange began in 2008, when Mesa sent 7,000 acre-feet of reclaimed water to the Gila River Indian Community. (One acre-foot is enough to serve about 2.5 Phoenix-area households for a year.) The exchange increases each year.

In 2026, Mesa is scheduled to send the Community's farmers 29,400 acre-feet of reclaimed water. In exchange, Mesa will receive 23,520 acre-feet of Colorado River water per year.

Chandler has the infrastructure to reuse more than 90 percent of its reclaimed water to irrigate parks, golf courses, landscaping and crops, and for industrial cooling towers. Chandler stores its remaining reclaimed water underground for future use.

This exchange is just one example of how AMWUA cities and Arizona Indian tribes are working collaboratively on sound water management programs that benefit our growing region.