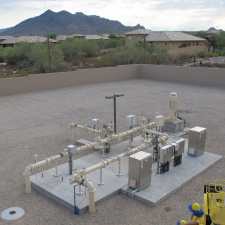 The desert is not a place where water is taken for granted. In desert cities, water must be managed. Each of the AMWUA member cities has a water management plan and part of that plan is storing water. The water would be used during times of Colorado River shortages, such as those we might be facing because of falling water levels in Lake Mead.

Storing water is a tricky business in the desert. Pools and lakes lose large amounts of water to evaporation each year. Water tanks are just too small for the amount that needs to be stored to provide a cushion. Underground is the secret to desert water storage. Cities store water in aquifers.

Underground water storage is an investment in the Valley's water supply resiliency. Over the last two decades, the AMWUA cities have collectively invested $400 million in storing nearly 1.7 million acre-feet of water underground. That's enough water to meet the needs of the AMWUA cities for more than 2 years, but it would never be used up that quickly because of the diversity of our water supplies.

What is an aquifer? It is not an underground lake or river. It is not a basin deliberately carved out under the ground. Officially: An aquifer is any geological site that can yield usable quantities of water. Unofficially: An aquifer is an area deep underground where water settles between rocks and gravel like water would settle in a pail of golf balls.

Where does the water that is stored come from? The AMWUA cities store underground reclaimed water and a portion of their allocations of Colorado River water delivered through the Central Arizona Project. Water from the Salt and Verde Rivers delivered by the Salt River Project is generally not permitted to be stored underground. However, some AMWUA cities helped pay to increase the storage capacity behind Roosevelt Dam and are permitted to store underground their portion of the water captured by the Dam.

Who keeps track of how much each city stores? Each acre-foot of water that is stored underground to be pumped in a later year is called a Long-Term Storage Credit. The Arizona Department of Water Resources oversees underground storage, maintains an account for each city or person that stores water underground, and adds to or deducts credits from the accounts.   (One acre-foot is enough water to cover an acre of land a foot deep or to serve the annual needs of 2.5 average Phoenix area households.)

So we have nothing to worry about, right? No plan is ever perfect and some cities will be able to pump their Long Term Storage Credits more easily than others. But there's a bigger problem. Current law allows a city (or another entity) to store water underground in one location and pump it later from a completely different location. So someone could store water underground near Buckeye and later pump it in Apache Junction. In this case, the water being pumped is not the water that was stored, but groundwater, or just as bad, water stored by someone else. This disconnect between the location of water storage and the location of pumping can also lead to localized areas of groundwater decline. It is an unsustainable practice that Arizona lawmakers should address.