Desalination: Is It A Practical Solution For Arizona’s Future Water 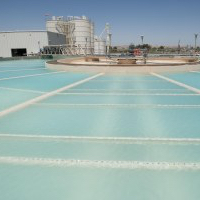 Engineers can take salt out of ocean water and create water for drinking and irrigating crops. Desalting water on an industrial level is a great technological achievement. The process, however, remains expensive and messy. The world, pushed by need, has moved ahead with desalination projects while researchers work to create more efficient and Earth-friendly technology.

Desalination requires an enormous amount of energy to push streams of water at very high pressure through membranes, which trap salt particles. As fresh water is produced, so is a wastewater stream with highly concentrated salt.

Researchers are working to reduce the cost of desalting by finding ways to use energy more efficiently and add solar to traditional energy sources. Newer plants are often co-located with power and wastewater plants to help reduce transmission costs and to clean up the waste on-site.

Water poor, energy rich countries, such as the United Arab Emirates and Saudi Arabia, were among the first to build large desalination plants. Technological advances have reduced costs enough to entice more countries to desalt water for their citizens. The plants are more practical for countries with large coastal population centers, such as Israel, China, and Australia.

Concern about availability of fresh water is pushing this country to consider desalination as a way to augment supplies. The largest U.S. plant to desalinate ocean water is now being built in Carlsbad, California.

Building the Carlsbad plant hasn’t been easy. It took six years and 14 lawsuits before Carlsbad broke ground in 2012. It will be completed in 2016, but delivering water by the end of 2015. According to the San Jose Mercury News, it will take 38 megawatts a day to power Carlsbad, enough energy to power about 28,500 homes for a day. Carlsbad will produce 7 percent of San Diego County’s drinking water needs and the water will cost twice as much as water from a new reservoir or reclaimed wastewater.

So, how does all of this impact Arizona?

The state already has a desalination plant near Yuma. The plant does not desalinate ocean water. The federal government built the plant to clean salt from agricultural runoff. The U.S. was mixing the salty runoff with Mexico’s legally allotted share of Colorado River water. In the early 1970s, Mexico protested and the U.S. agreed to build the Yuma desalting plant.

The plant was completed in 1992 but shut down shortly after it began to operate. The cost of cleaning and desalting the runoff was too high. It was much cheaper to send Mexico Colorado River water stored in Lake Mead.

Since then, the plant has operated sporadically, never at full capacity and never longer than a year. It was last operated at 1/3 capacity for 328 days in 2010 through 2011. The plant needs to be upgraded and is being used mainly for small research projects.

Some Arizona water experts see the Yuma plant as a worthwhile project to revamp and use to supplement the Colorado River water supply. About 100,000 acre-feet a year of agricultural runoff can be delivered to the plant through a 20-mile canal. Arizona State University Professor Rhett Larson is not convinced it is the most efficient option for Arizona.

Larson, a water law and policy expert, envisions an agreement between the U.S. and Mexico to build new and more efficient desalination plants, co-located with power and wastewater treatment plants, in northern Mexico and along the Baja peninsula. Water from these plants could be routed directly to Arizona, but delivering the water would add to its expense. Larson said a more cost-effective solution would be for California to use the desalinated water generated by the plants and leave more water in the Colorado River for Arizona to use.

For now, water managers across the west are watching the fate of Carlsbad to determine the future of U.S. desalination projects.