Drought: Five Things You Need To Know About This Rainy Winter 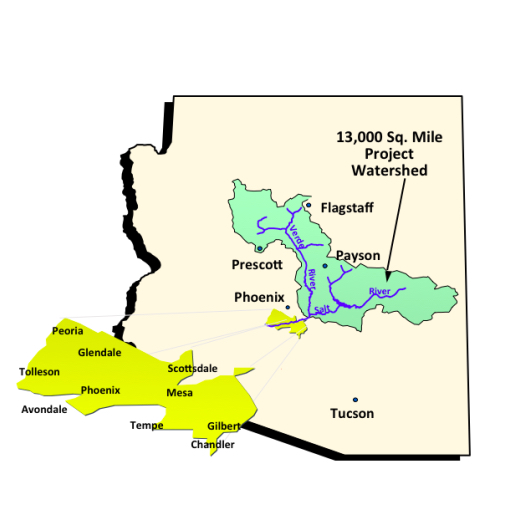 Many people are wondering what this rainy, snowy winter means for Arizona after more than two decades of drought. Here are five things we know right now.

2. This is a good start. Weather in February and March must remain cold and wet to hold and increase the gains and potential gains in both reservoirs. Water resource managers are pleased with rain but prefer snow accompanied by extended weeks of cold temperatures. Low temperatures keep the snow on the ground longer, which stops the water in the ground from evaporating and helps to reduce the threat of summer wildfires. The slow flow from melting snow also delivers cleaner water and is easier to manage in a water delivery system. So while it has already been a good winter, we will have to wait until April to know if it has been a great season.

3. The drought is not over. Research shows that drought cycles and wet cycles in Arizona run 20 to 30 years. A drought cycle has fewer wet years than dry and a wet cycle has a greater number of above average rainy years. The current record-breaking drought cycle began around 1996. The last six years have been the driest on record in the Salt and Verde rivers’ watersheds. If the weather follows historical trends, the current drought could be coming to a close within the next several years, but there’s no certainty and it does not factor in climate change. It would take a few years of greater than average snow and rain to begin to heal the wounds left by the current drought. This includes helping to replenish local aquifers used to back up water available in dams and reservoirs. Plus, two or three years of well above-average precipitation on the watersheds that feed the Salt and Verde rivers would help to re-establish depleted wildlife, such as quail and deer. That much precipitation would help to restore overgrazed grasslands and begin to create a healthier forest, with trees not as susceptible to diseases and bark beetle infestation.

4. AMWUA cities are built for drought. Sunshine is the norm in Central Arizona and rain is an event. We have never denied that we live in an arid part of the country and we plan for drought cycles. AMWUA cities save water underground for future use, keep leaks within their water distribution systems to some of the lowest rates in the country, and re-use 99 percent of their wastewater. Salt River Project (SRP) operates the system of reservoirs and canals that store water from the Salt and Verde rivers. After a rare rainy year in 2010, SRP has faced six dry years on the rivers’ watersheds. Despite record low precipitation, Roosevelt Lake has remained half full and SRP has been able to fill water orders for farmers, industries and cities. SRP was forced to limit water orders by 33 percent in 2002, the driest year in the Southwest in 1,200 years. That year, the SRP system was only 25 percent full and Roosevelt Lake alone was down to 10 percent full. It was the first reduction since the 1950s.

Central Arizona Project (CAP) operates the canal that brings Colorado River water released from Lake Mead to Arizona. CAP has not yet had to reduce water supplies due to a Colorado River shortage. The state’s cities, farmers and industries currently are working together to maintain and increase the level of water stored in Lake Mead and prevent a water shortage declaration next year. The recent increase in winter precipitation and snowpack in the Colorado River Basin decreases the chances that a shortage would be declared in 2018. So, while we regularly face metrological droughts, our water supply droughts are rare.

5. You can make the rain count. Homeowners, apartment managers and businesses make a contribution to our reservoirs when they turn off their irrigation systems and auto-fills on their pools each time it rains. More homeowners and communities also are harvesting the rain by contouring their landscapes to hold storm runoff. Swales built around trees and plants help rainwater stay in place longer so the water soaks deep into the landscape and stays available to plants and trees longer. All of this reduces the need to irrigate and the demand on city water supplies, which in turn saves more drinking water for drinking.