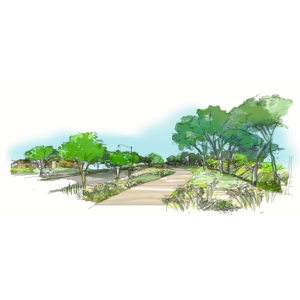 Salt cedar is a bushy, invasive tree that can change the face of a landscape in a dangerous way. Three West Valley cities and Maricopa County are pushing to eradicate as much salt cedar as possible along an 18-mile stretch of the Gila Riverbed. Once destroyed, the goal is to replace the salt cedar groves with a wetlands habitat of native plants and trees that will attract wildlife, hikers, birders and horseback riders.

Here are three reasons salt cedar, also known as tamarisk, is a hazard in this section of the Gila Riverbed:

In 2006, the AMWUA member cities of Avondale and Goodyear partnered with the City of Buckeye and the Flood Control District of Maricopa County to work together to create something better within the Gila Riverbed. The project is called the El Rio Watercourse Project.

The 8,000-acre El Rio Watercourse Project would be a grand addition to a trio of projects already built along the Salt River: the City of Phoenix’s Tres Rios Wetlands and Rio Salado Habitat Restoration Area and Tempe Town Lake.

Hope was high for the project in 2006, when new housing developments were leaping across the West Valley. City and county planners expected that builders would be eager to reclaim and develop the land along the Gila. Developers would reduce the possibility of flooding by helping to eradicate salt cedar and building levees needed on both banks of the river. That would make it possible for the cities and county to move forward with the El Rio Watercourse Project.

Then the economic downturn brought the Valley to a rough stop, slowing but not totally eliminating work toward the river restoration project. The Flood Control District continued with two research projects in the Gila to determine the most efficient methods to limit the growth of salt cedar and encourage the growth of native plants. 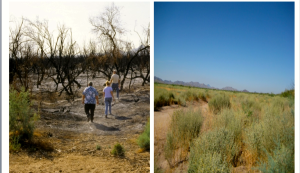 Before and after restoration at Miller Road in Buckeye

The three cities involved in the partnership are each moving ahead with a pilot project designed to showcase the possibilities of the completed project. The cities’ plans include parking lots, trails, educational kiosks, outdoor classrooms, lakes and wetlands. Currently, the cities are drafting common design guidelines for trails and other development along the river expected to be ready in the fall for public review.

The Flood Control District is creating a salt cedar management plan for the El Rio Watercourse Project that includes testing soil conditions and water availability to determine which native species would effectively replace the invasive species and in what areas. The District is also funding additional studies to help facilitate salt cedar removal in strategic locations along the river.

The District estimates it will need $150 million to build levees and at least $300 million to eradicate and replace salt cedar in the project site. The cities and the counties are working collectively to seek federal funding with help from members of Arizona’s congressional delegation. We’ll keep you informed.