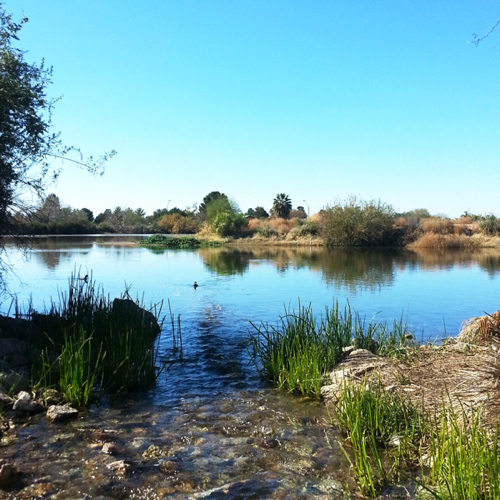 In 1986, the Town of Gilbert began storing treated wastewater in a pond at Cooper and Elliot roads. It did not surprise town officials that the pond attracted birds, but they were surprised by how many people the birds attracted. Unprepared for birdwatchers, the town fenced the pond.

The lesson wasn't lost on Gilbert officials. If a place to watch birds in the middle of town made residents happy, why not turn a public works storage plant into an amenity. The town grew along with the idea. When Gilbert expanded its wastewater storage to a second site,  there were no plans for fences.

By 1999, the second site for wastewater storage had grown into a 110-acre wildlife habitat called Riparian Preserve at Water Ranch at Guadalupe and Greenfield roads. The Water Ranch also includes a library, a fishing lake, a park, a fire station and Gilbert’s drinking water treatment plant.

The Riparian Preserve attracts more than 200 species of birds and thousands of visitors annually. Gilbert doesn’t count the number of visitors but goes through about 8,000 preserve maps each year. That doesn’t include regulars who no longer need maps. About 2,000 students visit the park to enhance their classroom work annually. Visitors come with strollers and kids, cameras and binoculars to search for wildlife, sit quietly or walk.

Inside the preserve, there are 4.5 miles of hiking and horse trails lined with dense vegetation and bubbling streams that attract wildlife. The trails wend among seven 10-acre storage ponds, most often called recharge basins, that mimic wetlands.

These recharge basins play a key role in the town's commitment to use 100 percent of its treated wastewater, also called reclaimed water. When Valley cities talk about “managing” water, recharge basins are part of most cities’ plans to provide a secure water supply for their residents and businesses. The basins hold the water and allow it to percolate into the ground where it can be pumped out later.

Here are several ways Gilbert uses wastewater sent to its recharge basins in the Riparian Preserve.

The basins are drained periodically, maintaining small ponds for birds and some fish. Draining the basins allow a tractor to turn over a foot or two of the dirt at the bottom of the basin. This prevents the weight of the water from compacting the soil and makes it easier for the soil to absorb the water.

The Riparian Preserve is serving its utilitarian purpose, but also serves as an urban retreat for residents and recreates habitat that is disappearing. Farms fields and developments have been built over many natural wetlands or riparian areas. The U.S. Environmental Protection Agency reports there are about 1,000 manmade wetlands operating nationwide, most in the southwest where reclaiming wastewater is a top priority.

The preserve has a colorful play area, plenty of picnic shelters and benches, a small campground, and the Gilbert Rotary Centennial Observatory, which is open on Friday and Saturday nights. Gilbert preserve staff members also offer monthly observatory programs and preserve tours.

One of the most important missions of Gilbert’s Riparian Preserve is to educate. It is a great place to take the kids and remind them that we’re saving water for drinking and bathing and growing industries and also for a variety of wild reasons.