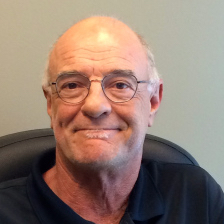 There are many well-known names in Arizona's water history. U.S. Senator Carl Hayden and Congressman John Rhodes delivered the votes in Washington that brought Colorado River water to the state. Governor Bruce Babbitt and state Senator Stan Turley wrestled the Arizona Groundwater Management Act into law and stopped decades of relentless over pumping of this non-renewable resource.

But few have ever heard of Val Danos, who retires this week as AMWUA's go-to guy on number-crunching issues and the nuts and bolts of good water policy.

Born Vlassios Constantine Danos, he proudly graduated from Worcester Polytechnic Institute in 1976. After a few years working for the Environmental Protection Agency in the San Francisco Bay area while following the Grateful Dead, Val’s road led him to Phoenix. It wasn’t long before he was hired by AMWUA.

If your water is supplied by the cities of Phoenix, Scottsdale, Mesa, Tempe, Chandler, Glendale, Peoria, Avondale, or the Town of Gilbert, you've benefited from Val’s efforts. Together, he and I negotiated the agreements that allow these municipalities to receive water from the Salt River Project’s reservoirs along the Salt and Verde rivers northeast of Phoenix. SRP water now makes up about half of these cities’ supplies. Val also helped to develop other agreements with SRP, including one permitting the cities to use SRP canals to deliver Colorado River water to their water treatment plants.

Over the years, he's worked on measures to enable the storage of water underground for use in times of drought, laws to enhance the state's water quality, and so many more important water management initiatives that to list them would be to list many of the accomplishments of AMWUA itself.

Val has become a respected member of the water community (known collectively as water buffaloes) and the only one who dares to rock a seersucker suit (when he's not in jeans). He is a familiar face at important meetings at the Department of Water Resources, the Arizona Water Banking Authority and the Central Arizona Project.

Here at AMWUA, Val is our resident historian, fact-finder and curmudgeon. Colleagues have learned to ignore the loud arguments he has with his computer as he battles it to assemble his exhaustive spreadsheets and power points. He is that old school engineer, whose “sneaking suspicions" push him to go beyond the numbers, to dig up the truth behind what others blithely assume are the facts. Pair that doggedness with a real concern for Arizona’s future water supply and you start to get a sense of the man.

He is the kind of guy you want to play golf with -- or have a cup of coffee with to talk about the state of the Red Sox and the world . . . in that order.

They don’t make ‘em like Val anymore. He has been at the heart of much of the work we've done at AMWUA for three decades. We will miss his raucous laughter, his facile mind and his humanity. The legend of Val Danos may have gone unsung in the state at large, but he is a hero here at AMWUA.