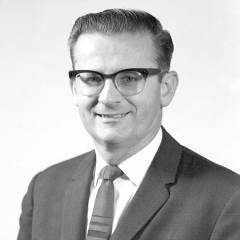 A great man passed away on January 6, 2016 just shy of his 94th birthday. His name was Wes Steiner. If you weren’t around in the 60’s, 70’s or 80’s, you might not have heard of Wes. But the western water community knew him well. He was a visionary and a pioneer, and his influence on water management in Arizona has been profound.

Wes began his career in water in California, where he eventually became the head of the state’s water planning effort.  He advised Governor Pat Brown (yes, Jerry’s father) on steps California should take to plan for its water future.  He had an enviable job, but Arizona lured him away for the chance to work on a big, complicated and politically challenging engineering project.  It was known as the Central Arizona Project and the state was counting on it to bring a large share of Arizona’s Colorado River water to Phoenix and Tucson and parts in between.

Wes became the state’s Chief Engineer and head of the Arizona Water Commission.  At the same time that he was lobbying Congress to authorize the construction of the Central Arizona Project, Wes began developing an Arizona State Water Plan to advance prudent use of our limited water resources.  The State Water Plan, published in 1975, sounded an alarm about the state’s severe over-dependence on groundwater supplies.  It stated pointedly, “For years Arizonans have been using water more rapidly that Mother Nature has replenished it.  This is possible only through the massive borrowing of waters banked as groundwater reserves in past geologic ages.”  The Plan urged that steps to be taken to reduce this overdraft.

When the legislature established the Groundwater Management Study Commission in 1978, Wes became its foremost technical consultant.  He did additional studies, made recommendations and argued passionately for what he thought was needed.  He had a monumental influence on ensuring that the 1980 Groundwater Management Act would result in needed change.

That influence continued as he stepped into the role of the first Director of the newly established Arizona Department of Water Resources.  Like most engineers, Wes was methodical and precise, but he could write like the dickens, a skill that served him well in this new position. He hired the best and the brightest, demanded excellence and built a first-class agency.  Many of today’s Arizona water professionals began their careers at the new agency.

The Department’s achievements under Wes’s leadership include the successful defense of Arizona’s Colorado River rights before the United States Supreme Court, and convincing state and federal courts that the Groundwater Management Act should be upheld.  He played an important part in the federal approval of the Central Arizona Project and recommended to the Secretary of the Interior how the Project’s supplies should be allocated.

Former Governor Bruce Babbitt has said of Wes, “Everything that we achieved for Arizona’s water future on my watch had its origins in his advice and counsel and knowledge.  His monument is everywhere in water administration and legislation and that wonderful way of bringing all us fractious Arizonans together at critical times.”

Wes hired me to serve as his Chief Counsel shortly after the new Department of Water Resources was established in 1980.  It was a dream job in a golden time in state government.  But it was Wes who made that so.  He supported and mentored me, and ultimately recommended that Governor Babbitt appoint me to succeed him.  I am forever blessed by our friendship.  He was kind, accessible and forthright, and people liked and admired him.  Smart, courageous and fair, he was an extraordinary public servant.