Is There Effluent In My Park? 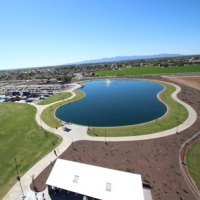 A 6-acre lake in the middle of Peoria's Pioneer Park opened to fishing in September. It will draw an estimated 3,000 anglers a year. These urban anglers will catch and keep about 80 percent of trout, catfish, sunfish, and bass within 30 days after they're stocked. The fish live in a lake of reclaimed water, also called effluent. Yes, it is treated sewage that once flowed down your toilet and your bathroom and kitchen drains.

Peoria along with other cities in the Greater Phoenix Metropolitan Area are experts at cleaning and making good use of nearly 100 percent of their wastewater. The reclaimed water is used to irrigate parks, school grounds, golf courses and crops. Some shopping centers and homeowners associations use it to irrigate landscaping. Each year, Valley cities send 20 billion gallons of wastewater to cool the Palo Verde Nuclear Generating Station, west of Phoenix. Reclaimed water also is used to replace groundwater and is banked underground for use during water shortages. All these uses of wastewater save drinking water for your tap.

• A+ and A: This is wastewater treated and disinfected until there are no routinely detectable disease-causing bacteria. It can be used to irrigate playing fields and in fire sprinklers and snow making equipment. Reclaimed water steps up from A to A+ if the treatment also removes high levels of nitrogen compounds, including nitrates and ammonia, so the water will not contaminate groundwater. In 2001, ADEQ required new or expanding wastewater treatment plants with an outflow of more than 250,000 gallons per day to produce A+ reclaimed water.

• B+ and B: This is wastewater treated to control for bacteria but to a less stringent level. This standard of water is similar to standards for swimming lakes, such as Lake Pleasant and Saguaro Lake. The water is for restricted access uses, such as dust control and to irrigate golf courses. The reclaimed water also steps up from B to B+ when the treatment removes nitrogen compounds.

• C: This is wastewater treated to remove disease-causing bacteria, but at a lower level than Class B water. It can be used in pastures for non-dairy animals and on non-edible crops, such as sod farms.

So, yes, it’s likely there is effluent in your park. Now it’s up to you to find out from your city’s water department if it makes the grade.