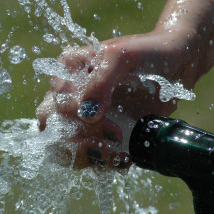 City water managers always think ahead. That's why the Phoenix Metropolitan area has weathered a 15-year drought and is prepared for possible water shortages in the future. This habit of thinking ahead has prompted the creation of an unlikely collaboration. It is called the Phoenix-Tucson Water Partnership and eventually would help both cities bolster water supplies in times of shortages.

Right now, a pilot project is underway. This is the first time such a cooperative effort has been attempted. Here’s how it would work:

The City of Phoenix takes the water directly from the CAP aqueduct and into its water treatment plants. From there the water is sent to homes and businesses. This is usually called “direct delivery.”

Tucson’s Colorado River water is delivered by the CAP into large pools called “recharge basins.” The water delivered to these basins percolates into the ground. Tucson then pumps it up through wells surrounding the basins, treats it and sends it to homes and businesses. This is usually called “annual storage and recovery.”

How the cities could help each other: Phoenix (and possibly other partners, including other Valley cities) would help to fund the expansion of Tucson’s recharge basins. Phoenix would store a portion of its unused Colorado River water at the expanded Tucson facility. The additional water in storage would help to raise the groundwater table in the Tucson area. A higher water table means pumps wouldn't  need as much energy to work and that saves Tucson money.

In times of future water shortages, instead of using its own Colorado River water, Tucson would pump Phoenix’s stored water. In exchange, an equivalent amount of Tucson’s Colorado River water would be delivered to Phoenix’s water treatment plants. Phoenix would save money by not building and operating additional underground storage and pumping facilities.

This year, Phoenix is sending Tucson and the smaller water agency 1,000 acre-feet of its CAP water to be stored in their existing recharge basins. (One acre-foot of water meets the needs of about 2.5 average Phoenix-area households annually.)

In the next year or two, Phoenix’s stored water will be recovered and delivered to Tucson and Metro water customers. In return, Phoenix will receive an equal amount of water from Tucson’s and Metro’s allocations of CAP water. The water would be delivered directly to Phoenix water treatment plants.