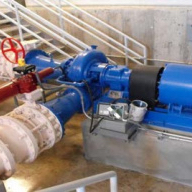 It takes a lot of power to get water to every Scottsdale home and business because much of the water must be delivered in underground pipes going uphill. Fortunately, what goes up must come down. Scottsdale hopes to use the water's downhill energy to create electricity.

Scottsdale covers 185 square miles and elevations vary by up to 2,500 ft. These small hydro-turbines would use the momentum of cascading water to spin a shaft and generate electricity. The turbines could be installed without much modification to Scottsdale’s water infrastructure.

The two units would not produce a great amount of electricity, but the clean, renewable energy would be used within the city’s water system to operate pumps and light facilities. The city would install one hydro-turbine where water flows downhill from one zone to a lower zone. The electricity generated would be used to operate equipment at a nearby wastewater station. The city would install another hydro-turbine at a point where water flows into a storage reservoir and the energy would be used to help provide electricity to the reservoir site.

The engineering plans are completed for the project. City consultants expect the hydro-turbines would pay for themselves within 11 years, but continue to function for another 25 years. Next step: The Scottsdale City Council will review the project and vote on whether or not to install the hydro-turbines.