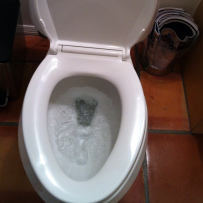 Charlene Kelly lives on Phoenix's Westside with her daughter and a grandchild who likes to flush toilets just for the joy of it.

Mrs. Kelly and her late husband bought their home 30 years ago and each time her grandson flushed those 30-year-old toilets he sent another 4-gallons of wasted water down the city’s sewer lines.

Mrs. Kelly also had leaks in her bathroom sink and backyard faucets. She knew about the state’s drought and that every drop of water mattered, but a plumber just cost too much. Instead, Mrs. Kelly captured the water from the outside leak with a bucket and used it in her washing machine.

A friend of Mrs. Kelly told her about a city of Phoenix program that would replace her old toilets with new toilets. The new toilets used only 1.2 gallons per flush and the replacement would cost her nothing.

Phoenix has been retrofitting older homes in low-income neighborhoods with water-efficient fixtures since 1987. The program started for two reasons: state legislation required the city to reduce its water use and the city wanted to reduce the impact of water costs on families who could least afford them.

In 2005, the city added an outdoor water audit to the services, which already included an interior water audit. Participants also began receiving water-saving landscape and irrigation information. The program helps about 300 households each year. Grants from the U.S. Bureau of Reclamation help the city pay for the new toilets and other water-saving fixtures.

In February, Mrs. Kelly made the first of what she expected to be many phone calls to apply for the new toilets. Instead a real person answered her first phone call and sent her a simple two-page application. Mrs. Kelly had two new water-efficient toilets within a month.

Much to Mrs. Kelly’s surprise, the city’s plumber also fixed a leak in a pipe in one of the toilet’s footing and stopped the leaks in her bathroom and backyard faucets. What the plumber couldn’t fix was her grandson’s fascination with even the high-efficiency flush. For more information about Phoenix’s retrofit program call 602 261-8367.