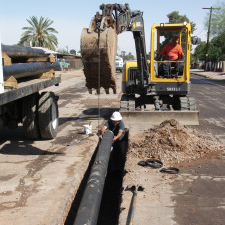 Solving the mystery of Lost and Unaccounted for Water can save a city money and conserve water on a grand scale.

Lost water is more than a conservation concern. No one is paying for the missing gallons of expensive, highly treated drinking water. That means water departments and companies are losing money.

So, how does this highly treated drinking water get lost?

EPA and Arizona officials say much of it is lost through infrastructure that allows water to overflow or leak while the water is being treated and delivered. Some water loss is blamed on theft. Some water actually reaches its destination, but never gets counted because meters are old or faulty or billing calculations are wrong.

EPA estimates that 16 percent of U.S. drinking water is lost and 75 percent of that lost water could be recovered.

Since the Arizona Groundwater Management Act of 1980, the state has required its largest cities and towns, as well as its largest private water companies, to keep the rate of Lost and Unaccounted for Water to 10 percent or less. Since 1992, the regulation limits lost water to 10 percent on either an annual basis or three-year average basis. This requirement is one of the toughest of its kind in the United States.

The Arizona Department of Water Resources reports that only about 7 or 8 of the 86 large suppliers struggle to stay within the 10 percent loss requirement. Those cities and companies not in compliance can be fined up to a maximum of $10,000 each day they are in violation, depending on circumstances such as the severity and duration of losses. The state, however, prefers to impose corrective measures on violators, such as requiring them to develop and improve conservation and efficiency within their systems.

When considering the drama of water loss, the size of a city is important.

Lost and Unaccounted for Water is becoming a bigger issue as cities around the world look for ways to save during times of drought and climate change. Here is an interesting New York Times opinion piece about water loss and recovery. There is more information at the U.S. EPA.