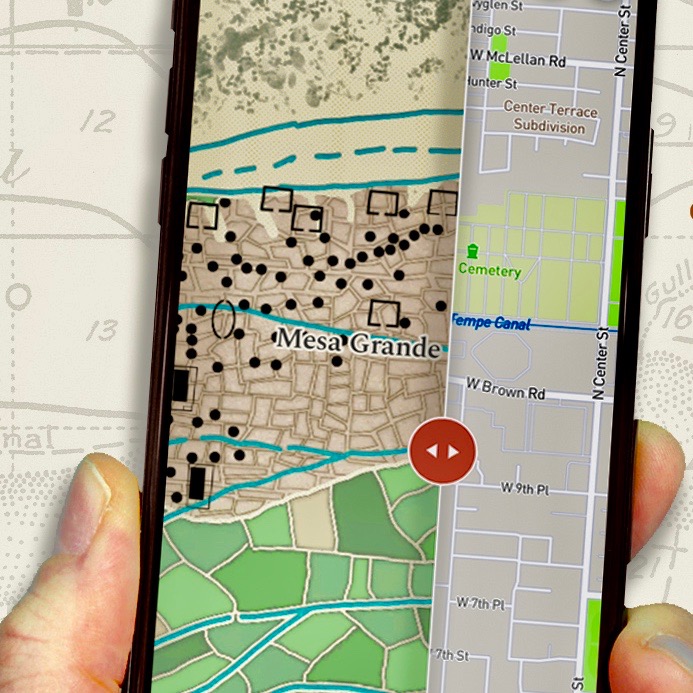 Later this year, you will have the opportunity to download a free app that will reveal the landscape of the Phoenix Metro area as shaped by the first Sonoran Desert people. The app will feature a map of today’s Valley and, with a swipe, a map of the Valley’s prehistoric landscape. You may find a canal and agricultural field, a ceremonial building, a ball court or an adobe village once occupied the space where you live, work or go to school.

"A Deeper Map" is one of five winners of the Water Public Art Challenge. Valley photographer Richard Laugharn and Scottsdale Arts will lead a team that will design the app and its accompanying website. The goal is to celebrate the human history of the Valley and the role water has played in sustaining populations in our desert Valley.

This is the third challenge offered by The New Arizona Prize, an Arizona Community Foundation program dedicated to raising public awareness about water. This year, competing teams were asked to create a public art project that honors the legacy of the Hohokam, also known as Huhugam. Archeological research shows that the Hohokam presided over the largest irrigation culture in the prehistoric New World and cultivated up to 110,000 acres of corn, beans and squash. Archaeologists from the Arizona Museum of Natural History excavated one Hohokam canal that measured 15 feet deep and 45 feet wide. These canals made this desert Valley the largest population center for indigenous people in the Southwest.

“A Deeper Map” is meant to delight, surprise and inform. The app will eventually map about 70 Hohokam sites overlaid by current maps, allowing you to locate these sites wherever you happen to be standing.  At some sites, the team will recreate landscapes built by the Hohokam using augmented reality technology, and app users will be able to view these sites using the camera on their phone or tablet. They may discover that their grocery store was once the site of a Hohokam ceremonial mound, their favorite biking trail follows the same path as an ancient canal, or their home is atop a Hohokam village or ball court. The project will include a website to provide storytelling, videos and more immersive virtual reality experiences for those who want to discover more.

For decades, archeologists kept quiet about the locations of Hohokam sites because they feared the sites would be looted for their artifacts. Today, most of the ruins have been overlaid with buildings and parking lots waiting for their re-exploration by a future generation of archeologists with new and better technology and tools. The creators of “A Deeper Map” will not reveal any of the few remaining sites still considered vulnerable.

“A Deeper Map” is a new model for teaching history that hopes to deliver the true scope of the Valley’s past. It is an interdisciplinary public art project that will require artists, archeologists, Native American historians, and technology developers. For decades, lead artist Richard Laugharn has been attempting to bring these skilled people together to spotlight the history of the Phoenix Metro canals. It was easy to say yes when Scottsdale Arts offered to partner with him for this competition. Scottsdale Arts will match the New Arizona Prize money of $50,000. “A Deeper Map” will be launched November 2019 at Canal Convergence, Scottsdale Art’s ten day public art festival.

The four other winning teams were City of Mesa, Water=Life: Making the Invisible Visible, The Continuum, Su:dagi Haichu Agga (Waters Story), Vesich eth ve:m (All of Us Together), We Are Still Here and Water Heritage Collective, Portal to the Past.