On The Job: Chemist Ensures Safe Water Flows To Your Home And Business 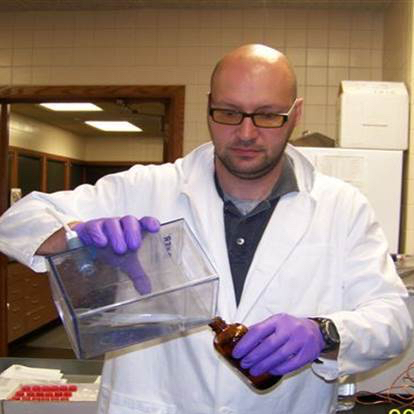 Mark Xerxis is a chemist, but don't imagine him behind a set of tubes, Bunsen burners and microscopes. Mark runs the metals lab within Scottsdale's Water Quality Laboratory, which means assuring Scottsdale's water never has a problem with elements such as arsenic, chromium, lead or copper. His main tool is something called an Inductively Coupled Plasma Mass Spectrometer. Mark gets up from his chair and writes the name on a white board. The piece of equipment looks like a giant copying machine with silver tubes venting out of the ceiling. Each morning it is Mark's job to maintain, calibrate and optimize all the machines in his lab before running the daily samples, up to 60 a day.

Scottsdale and all the AMWUA cities take numerous daily samples from their drinking water systems, wells, or wastewater treatment plants. Mark tests Scottsdale’s samples for about 30 metals. The U.S. Environmental Protection Agency (EPA) regulates most of the metals that can be found in water. The lab also monitors for metals that could be regulated in the future, known as “emerging contaminants.” EPA will change the amount of metal permitted in water if it has new data to support a revised regulation. For example, in 2006 the EPA changed the level of arsenic permitted in American drinking water from 50 parts per billion to 10 parts per billion. That required new equipment in the treatment plants and new testing in the labs.

Preparing himself for all this responsibility didn’t come easy for Mark. He arrived in the United States – Arizona specifically - in 1987 at age 19 speaking only Polish. His mother and father were active in Poland’s anti-communism Solidarity Movement when the movement’s protests – as well as its members - were violently suppressed. First his mother, then his father, made their way to the United States as political refugees. Mark and his sister joined their parents several years later.

Mark entered North High School in the Phoenix Union High School District as a senior. He credits the school’s English as a Second Language program for teaching him English quickly and well enough to move on to Phoenix College. There he pursued chemistry, a science that had enthralled him since he was a young boy. He kept studying and earned a Bachelor’s of Science degree in Chemistry from Arizona State University.

“You see people come here (the United States) and surround themselves with people who don’t speak the language and they don’t need to learn it,” Mark said, who understands how hard it is to learn a new language but calls not learning English a mistake. “Eventually, it backfires.”

After several years working as a chemist in private industry, Mark applied and was hired to work in Scottsdale’s Water Quality Laboratory. That was 17 years ago. Mark’s colleagues are responsible for four other labs within Scottsdale’s main lab where they monitor for organic and inorganic compounds as well as microbial contaminants. Mark and his fellow scientists are cross-trained to step into each other’s labs and take charge when necessary.

Water treatment is always moving forward and new processes are regularly being tested. Mark’s favorite days are when he gets to evaluate something new, like a proposed water treatment system. It’s up to the lab’s scientists to provide data about the strengths and weaknesses of a new treatment option, which often requires more than scientific know-how. Mark’s job includes presenting his findings to the city’s technical group as part of the decision making process. Also, Mark often makes presentations to explain the results of his experiments at industry conferences to help other cities optimize their treatment and testing processes. 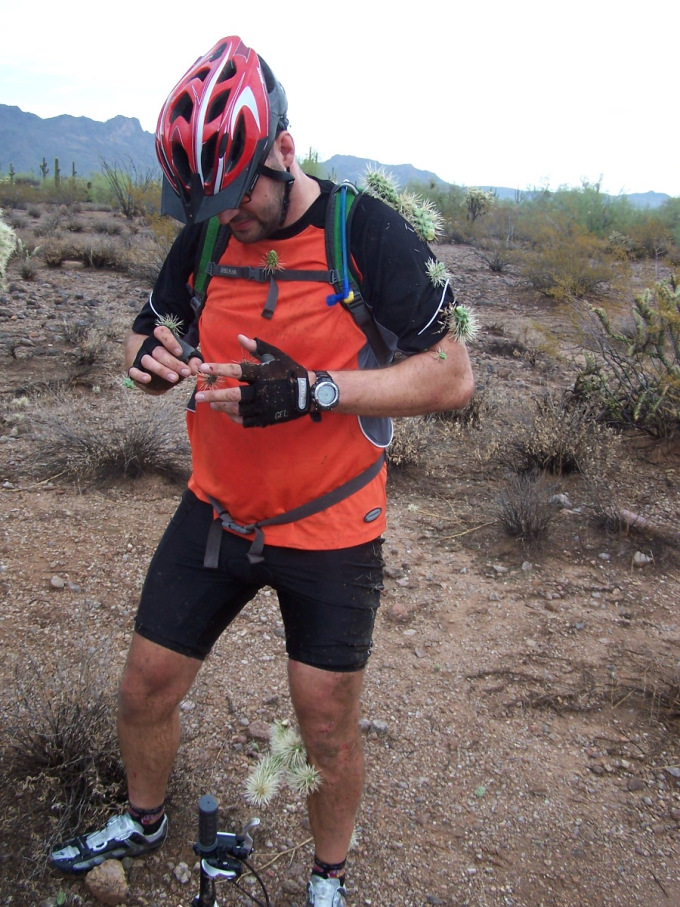 Mark, 47, lives with his wife and four rescued dogs in Apache Junction. Once out of the lab, it’s likely you’ll find him in the mountains. Truth be told, he’s a bit wild in his off hours. Here’s an example: On the hottest day of each Arizona summer the scientist straps to his back a hydration pack filled with ice and water (tap water never bottled: “I think it’s a waste of money. I work in the field, I test water and I know it is completely safe to drink.”). Then he puts a charged cellphone in his pocket and at 3 p.m. goes for a 10-mile mountain bike ride in the desert – just because he can. This year it was 117 degrees when Mark did his annual ride in the Usery Mountains. While he claims to be impervious to the heat, Mark doesn’t hesitate to show you photos of the time he was test-driving a new bike and suddenly veered into a patch of notoriously painful Jumping Cholla cactus.

In the summers, Mark works with high school students who intern at the laboratory. He likes to watch their eyes widen when they see the city’s array of equipment. Part of his job is to help them design an experiment and make a presentation to staff. One student decided to measure the metals in a cigarette so she could explain to her father the exact amount of metal he had taken into his body during his 20-year smoking habit. Mark said he has faith in the next generations of scientists to continue keeping cities’ water safe.

“It’s the best job there can be,” Mark said, calling himself just one member of a team that gets things done right. “It’s the people, the management, the science. Scottsdale has the best mix of everything. It’s very satisfying.”