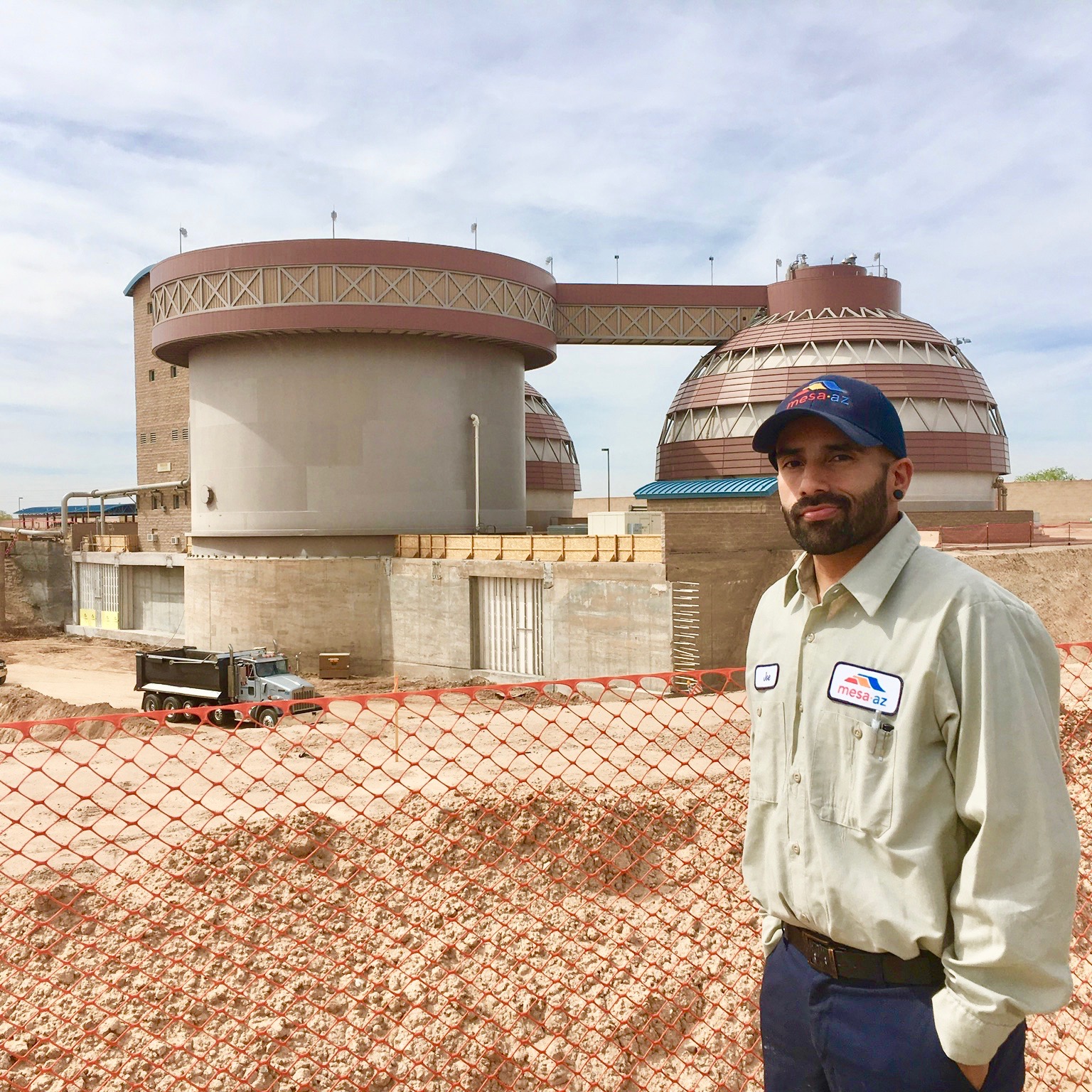 There was that morning when Joe Carbajal found himself cornered in a backyard facing down two pit bulls – one of which had his wrist in her teeth. The dog broke the skin but caused no permanent damage. It was the only dog that ever bit Joe during his three years reading water and gas meters for the City of Mesa. This was just one job on a career path Joe calls “kind of random.” That path has taken the 34-year-old through three car dealerships, a beer distributing company, and 12 miles a day on Mesa streets. We talked with him at the Greenfield Water Reclamation Plant a couple weeks after he had started his new job there as a mechanic.

Joe was in pain until his leg muscles adjusted to the daily marathon through Mesa reading an average of 700 meters a day. Sometimes when Joe showed up at 6 a.m. (7 a.m. in the winter) he got lucky and drew the shortest 400-meter route. The longest was 1,100 meters and included water meters and gas meters for a Mesa operated gas utility.

While a few water meters in Mesa are read automatically, most require the meter readers to open the lid with a stick and punch each meter’s numbers into a handheld computer. Joe describes that computer as about the size of a 1980s cell phone with an extended antenna. Joe also carried a spray bottle to clean the dirt off the meters and discourage the occasional snake, scorpion, tarantula or mouse inside the box. People were generally nice and he was always polite, but some folks just wanted to chat for a while with the nice young man from the city. “You’d answer them but try to keep it short because, like, I had 400 more meters to read that day.”

Joe was born in Prescott and lived in California and Hawaii while his father spent 10 years in the military. He returned to Mesa in the 6th grade. After Joe graduated from Mesa High School, he continued his education and was certified as a mechanic. He worked at several dealerships around the Valley for eight years and through the early years of the Great Recession, when his pay began to plummet. He survived because he lived in an apartment and had no children to support, but he was watching the pain caused by the recession all around him. “I could make it work, but others couldn’t.”

In 2010, Joe opted out of the mechanics business and joined a relative working for a company that delivered beer - 800 cases and 200 kegs a day. He was the muscle of a two-man team that started at 4 a.m. and worked for the next six to 12 hours, whenever the truck was finally empty. Joe hauled 160-pound kegs for five years. The hard work didn’t bother him, but Joe didn’t like his schedule. Holidays are big beer drinking occasions and Joe said he never had time off to celebrate with his new wife and his family.  It was Joe’s mother, a Mesa employee for 12 years, who told him about the opening for a meter reader position.

Joe wanted to move up in the water world. While reading meters, he took a class offered by the city and earned his Level 1 Plant Operator Certification in drinking water distribution. Here’s where Joe’s random career path begins to come together.  A colleague who knew that Joe had training and experience as a mechanic told him about an opening at the giant wastewater treatment plant operated by Mesa that also serves Gilbert and Queen Creek. Joe wasn’t sure it was the job he wanted, so he spent a few days shadowing a mechanic at the plant. He liked what he saw. It put his training in mechanics and water - and his muscle – to use on large, industrial sized engines that make the treatment plant work. Joe will be working closely with plant operators, who are responsible for the plant’s processes. “But the operators can’t pull a pump out, pull it apart and rebuild it. That’s something we do for them.”

Joe still had a bit of the new job jitters when we visited. He was studying for another Level 1 Plant Operator Certification, this time in wastewater, but was pretty sure he could pass it. He also was confident about his mechanical skills. What made him a little nervous was learning the details about how the plant operated so he could help keep it running smoothly. “Learning how the plant operates will help me diagnose and trouble shoot better.”

Joe and his wife, Mayra, live in Gilbert. His five years delivering beer gave him an appreciation for craft beers and craft beer festivals. Even after three years of walking 12 miles a day for Mesa, Joe still hikes with his wife and is still a dog lover. He lives with a Shih Tzu named Tank.