On The Job: Phoenix Team Protects Miles Of Water Lines 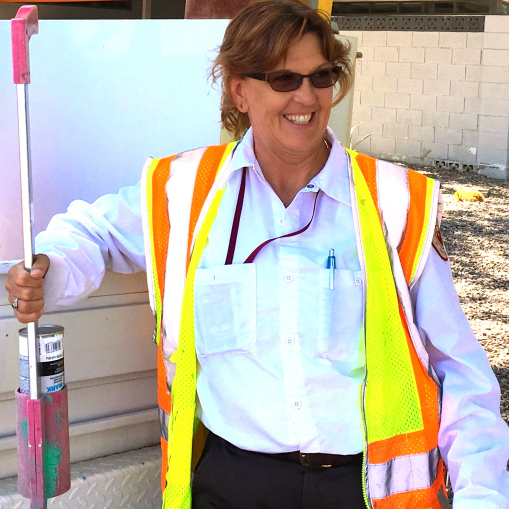 The City of Phoenix has 6,922 miles of water lines and 4,865 miles of sewer lines buried about four feet under our feet. It wouldn’t be hard for a contractor digging a pool in someone’s backyard or a crew widening a street to hit and damage one of those lines. It’s Tammie Burkett’s job to make sure they don’t.

Tammie is one of two Utility Foremen who work with 15 employees who protect water and sewer lines throughout Phoenix’s 540 square miles. Each week, Tammie and her team respond to about 3,000 requests to mark the location of water and sewer lines before someone digs. These lines are marked by those colorful doodles that appear from time to time on your street and sidewalk. Tammie said some people mistake these markings for graffiti and will even paint over them. Please don’t. The blue markings indicate there is a water line within 2 feet on either side and green markings indicate sewer lines. The lines show where workers must hand dig and gently expose the pipes. These underground water and sewer lines share space with gas lines indicated by yellow markings, electric by red and communication lines by orange.

The requests for Tammie’s team to mark water and sewer lines come through Arizona 811, a statewide agency that takes online reports or calls at 8-1-1 from anyone who is going to dig into the ground. Most contacts are from contractors who need to dig into city streets or sidewalks. Arizona 811 prevents accidents by requesting each utility to mark the ground showing the location of its underground lines before the digging begins.

Some calls come from homeowners putting in a pole for a driveway basketball hoop or from nurseries planting trees in yards.  The city will locate and mark any city-owned water or sewer lines under a yard, but will not mark the water line that runs from a water meter into a home. These lines are owned by the homeowner and are not the city’s responsibility.

Once alerted by Arizona 811, Tammie and her crew must respond and mark the area within two working days. In an emergency, such as an automobile accident that damages a power pole and shuts down electricity to a neighborhood, Tammie’s crew must respond within two hours. A team member always is on call for after-hour emergencies, which happen an average of 15 times a week. The on-call team member is particularly busy during monsoon season.

If anyone damages one of Phoenix’s water or sewer lines without calling Arizona 811 or damages a correctly marked line, that person may be responsible for paying for the repairs or possibly fined. It’s Tammie’s job to investigate what is known in her business as “contractor hits.” Sometimes the city makes a mistake when marking a line, but more often the person digging failed to contact Arizona 811 or was careless. Sometimes contractors dispute the findings and the case ends up in court. 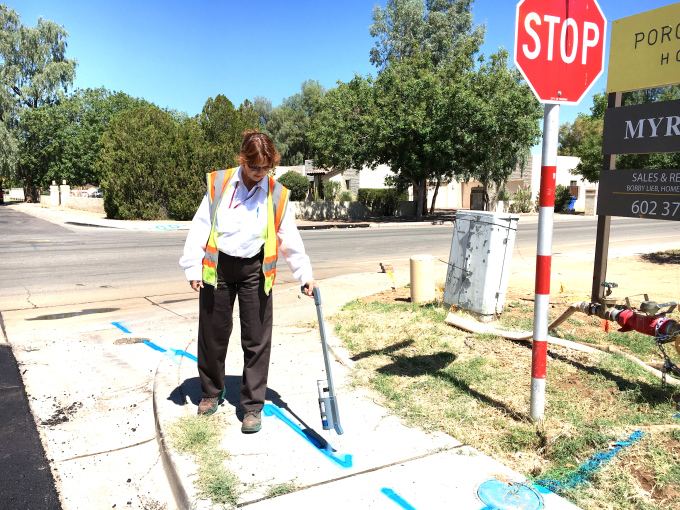 On the June day we visited, Tammie was working with a contractor who was putting in a swimming pool for a homeowner and sheared the top off a sewer line. The contractor had called the Arizona 811 number and knew where the sewer line was located.  “He just miscalculated while he was digging with his backhoe,” Tammie said. No sewage escaped, but it was a smelly mistake until a Phoenix crew repaired the hole the next day.

It’s rare that homeowners damage water and sewer lines, but it does happen. In some Phoenix neighborhoods 6-inch water lines are set back about 3  feet from the edge of the sidewalk and run under the front yards of homes along the street. On this same June day, Tammie was investigating a homeowner who had removed a large tree from his front yard. He had called Arizona 811 and received a “ticket” to show he had made the call but he removed the tree before the markings were placed. When he ripped up the tree, a 6-inch water line came with it.

Tammie cleaned trails and fought wild fires in Arizona and California before she began working for Phoenix 22 years ago. She started as a Parks and Recreation Department landscaper. Then Tammie decided she wanted to drive bigger trucks, so she earned her Commercial Driver’s License, transferred to the Phoenix Water Services Department and joined a team that cleaned and repaired wastewater lines.

For nine years, she vacuumed sewer lines and climbed into trenches to repair the lines, handling jackhammers, shovels and saws. “It’s not for everyone,” Tammie said. “It can be stinky – and dirty.” Tammie liked what she did then and likes what she does now, because she enjoys the people she works with. Tammie is from a military family that settled in Southern Arizona, where she graduated from Douglas High School.  She is ready to retire in a few years and return to that part of the state with her husband of 25 years.