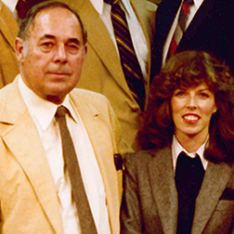 It was a golden era in state politics. Bruce Babbitt was Governor, Stan Turley was President of the Senate, Burton Barr herded the House Republicans, and Alfredo Gutierrez led the Senate Democrats. I was the Executive Director of the Arizona Groundwater Management Study Commission and new to the scene (a kid really at age 28), but it didn't take long to realize that these were great men working together to do great things.

Among the most important achievements of this period was the visionary 1980 Groundwater Management Act that protects much of our precious water to this day.   Without the courage and will of men like Stan Turley, Arizona would be in a crisis like California, which has waited too long to manage its groundwater and where farmers and municipalities are racing to drill deeper wells to meet ever-expanding needs.

In praising Senator Turley, the Arizona Republic wrote, "greatness of leadership is often a reflection of the times." Our times surely call for great leadership, but where are those in power willing to address our challenges? Many bemoan the lack of leadership in our legislature, and while I have opinions about its causes (term limits, the clean elections act and safe districts), opinions are just opinions. Meaningful action is all that matters and the passing of Senator Turley reminds us that we need smart and committed leaders now more than ever.

Although I never could bring myself to call him Stan, I know first-hand what made Senator Turley great. It was more than the length of his term in office or the power of his position. It was his character.

He listened with an open mind and didn't assume he had all the answers. He invited all to participate in the crucial water discussions of his day and, while he supported his agricultural and ranching friends with a loyalty born of common interest, he also saw common interest with the mining companies and cities and sought their views.

Senator Turley was brave. When the Groundwater Commission was facing the critical stage of its deliberations, Chairman Turley decided it was time for, as he described it, the "nut cutting," even though the agricultural representatives appeared to be losing ground. In the spring of 1979, he convened the Commission at the secluded Castle Hot Springs near Lake Pleasant to begin three days of decision-making in earnest (this in the days before cell phones). The mines and the cities collectively outvoted agriculture and the stage was set for contentious public hearings, but Senator Turley did not flinch. He accepted the findings of the majority and we continued forward.

He was also compassionate. One week before the groundwater legislation was to be submitted to the legislature, the Commission staff and I panicked. We were simply exhausted. We told Senator Turley there was no way we could finish the new law in time. Senator Turley calmly coaxed us back to the table and helped us refocus our efforts. We made the deadline.

A great man, he encouraged greatness in others. During one of the most difficult periods of drafting the new law, Senator Turley asked the negotiators to set aside their parochial interests for a few minutes. He asked them to think about what each of them needed to adequately represent his interest group. In a time when give and take was valued, not scorned, he asked each member to listen respectfully and to work in good faith toward a compromise that all could support.

As time went on, Senator Turley and I often reminisced about the Groundwater Management Act and the remarkable events leading to its passage. He was so proud of the Act, but with characteristic humility, always downplayed his role in making it happen.

In recent years, our conversations broadened. We talked about nearly everything--tattoos, yoga, his growing list of friends who had passed away, the new-fangled names of his great-grandchildren, heartbreak and love. He was interested and interesting and, right to the end, positive, telling me, "I have a big ol' chair and a clicker and I can always find something to watch." He loved his kids, and their kids, and their kids, and he missed his beloved wife, Cleo.

I will miss him. Bon voyage my dear friend.