Saving Water: A Global Goal With A Very Local Application 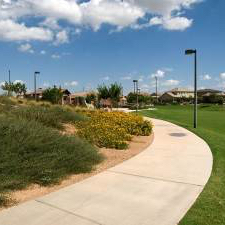 Cities in the Greater Phoenix Metropolitan Area are willing to give you money and free experts to make water-saving changes in your home or business. But each city creates a different package of water-saving offers. Why? Because it's smart conservation planning.

A city creates a water conservation program based on its customers' demands and its infrastructure. A city must consider its demographics, budget, age and size, and the age and size of its houses and businesses. What works for a city with manufacturing and old neighborhoods, isn’t necessarily going to work for a city with resorts and newer planned communities.

The 10 AMWUA member cities implement more than 300 conservation measures among them.

Many are similar with slight variations. Others are distinct to a city’s particular needs. Here are a few examples:

Glendale is one of many Valley cities that has a desert-adapted demonstration garden.

The cities’ commitment to conservation and efficient water use is not new and their conservation programs are not stagnant. Since 1982, while working through AMWUA, the cities have participated in a regional conservation program to reduce water use. The conservation professionals of AMWUA’s ten member cities meet regularly to share data and ideas, learn from one another’s programs, and to build resources and materials for homeowners and businesses.

Most cities offer or support water science and conservation education programs used in schools throughout the Valley, helping to foster a generation sensitive to water use. Cities offer free adult classes on topics such as irrigation efficiency, how to maintain landscapes that will thrive in the desert, and how to find and fix leaks. Many cities have informative videos on their websites and handouts you can get just by calling their offices. To better understand how you can implement water saving measures that work best for your area, click on the following links to your city’s conservation program: