Softening Water Is Tough On Cities 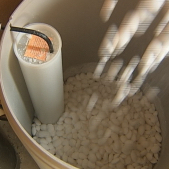 Valley cities can treat wastewater to such a quality that it can be used to fill small fishing lakes in parks, to irrigate landscaping, and to be stored for later use in underground aquifers. This treated wastewater is aptly called reclaimed water.

While this is a remarkable bit of technology, the treatment process fails to remove enough of one problematic pollutant:  salt. For example, salt in irrigation water means golf courses must use more fertilizers and more water to keep grass green. Salt in the aquifers means it will take more time and money to treat the water when it is pumped out for use.

It is possible to get more salt out of wastewater, but the process requires advanced and expensive technology most cities can’t afford.

Nearly half of Scottsdale homes have water softeners, which account for about 30 percent of the salt in the city’s wastewater. On July 1 Scottsdale became the first city in Maricopa County to offer property owners a rebate on their water bills if they change their water-softening habits. The city will invest $82,000 a year in the two-year pilot program with the goal of enticing 600 homeowners a year to make the change.

Many water softeners recharge automatically once a week, a process that sends up to 30 gallons (even more in older softeners) of very salty water into the city’s sewer system. Scottsdale is offering three different types of water softener rebates.

After two years, the city will review how its residents responded to the rebate program. The city wants to determine if enough people would participate in a larger rebate program that could significantly reduce the amount of salt in the city’s wastewater. There is more information about Scottsdale Unsalted on the city’s website.