Study: Western Cities Know How To Save And Reuse Water 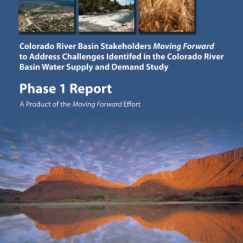 Along with thirty conservation leaders and experts in the southwest, I've been wrestling with a project since 2013. It's part of the Moving Forward effort initiated by the Bureau of Reclamation and the seven Colorado Basin states that followed completion of the Colorado River Basin Water Supply and Demand Study of 2012.

The study confirmed that action is needed to prevent significant shortfalls of Colorado River water to meet demands in coming decades. The study also found that a wide range of solutions is needed, including municipal and industrial water conservation and reuse.

Our specific assignment: document conservation and water reuse efforts in these metropolitan areas over the last 25 years, highlight successful programs, and identify opportunities to build on these successes.

The workgroup’s conclusions can be summed up in simple math. If customers in these ten metro areas had continued to consume water as they did in 1990, demand for water would have been 1.7 million acre-feet higher in 2010 than it was. That’s a lot of water not consumed. One acre-foot is enough to serve 2.5 Phoenix households for a year.

There's more. The workgroup found that all ten of the metro areas treat wastewater and reuse it for beneficial purposes. Together the ten areas reused a total of 709,000 acre-feet of water in 2012. Clearly, these metropolitan areas are making considerable progress in water conservation and reuse.

The workgroup also came up against a hard economic fact. Conservation and reuse may not result in substantial reductions in Colorado River water use in the future. The water cities save will be used to offset or delay the need for new water supplies to meet growth in these bustling metro areas that represent 20 percent of the country’s Gross Domestic Product and employ 20 million people.

The workgroup’s first task was to set realistic goals. We quickly decided that trying to compare one metropolitan area to another to measure water-savings was unrealistic. Here are some reasons why. 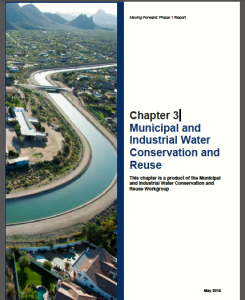 The workgroup's next task was to determine what had happened to water use in the metro areas since 1990 and what could be expected in the future. Here are two of our key findings:

As a final task, the workgroup identified potential actions to accelerate conservation efforts in these ten metropolitan areas. These actions include:

Last week, Reclamation published the Moving Forward: Phase 1 Report, which includes chapter 3 detailing the workgroup's efforts. It’s not hard to read and is packed with details and charts. It includes 44 case studies of conservation and reuse programs within the ten metro areas. It makes for some of the best reading in the report.

Our next job is to take action. The goal of Moving Forward: Phase 2 is to implement pilot projects based on potential actions identified by the workgroup. I guess it's back to work.