Tempe Town Lake: How (And Why) Did They Do That? 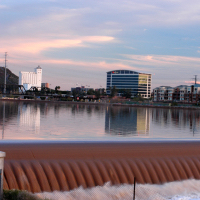 Tempe Town Lake is a manmade lake set in a dry riverbed in the middle of the desert. The 261 acre urban lake is a surprise to newcomers and still a marvel to those who were here when it was first filled in 1999.

The lake is the centerpiece for a City of Tempe recreation area that hosts fireworks and Valley parties, team rowers and kayakers, anglers and sunbathers. The lake attracts 2.7 million people each year.

The water stopped flowing in this part of the Salt River over 100 years ago when dams were built upstream to store water for Valley farmers and later for homes and businesses. The empty riverbed became the Valley’s dump. Tempe Town Lake was part of a Valley-wide effort to control occasional, but damaging flooding in the riverbed and to turn the Salt Riverbed into an asset instead of a scar.

Phoenix has two restoration projects in the riverbed with similar goals: the 600-acre Rio Salado Habitat Restoration Area south of downtown and the 500-acre Tres Rios Wetlands at the far southwest edge of the city.

In the mid 1960s, Arizona State University students first began envisioning an ambitious plan for the empty riverbed. The students designed a series of locks and channels down Salt River that created an inland seaport. By 1974, the concept for the riverbed was tamed to 38-mile flood control channel and green belt with lakes and streams.

In 1987, a proposed countywide property tax to fund the green belt was defeated by voters, except in Tempe. The empty riverbed served as their city’s gateway and Tempe voters liked the idea of restoring water to the river and making adjacent land usable.

A decade later, Tempe was working with local and federal agencies and other partners to build a lake in the Salt River channel. Tempe Town Lake was filled in 1999 using four rubber dams that could be deflated when floodwater rushed down the riverbed.

It’s not easy digging a flood channel into an empty riverbed and creating a lake on top of it. Here are just a few of the secrets to building a lake in the desert.

The Tempe Town Lake emptied abruptly in 2010 when one of its four rubber dams burst. It reopened that same year, and Tempe is now building steel hinged dams to replace the rubber dams.

Tempe Town Lake is surrounded by trails and is stocked with fish. It has a Splash Playground for kids and boat rentals. Perhaps it’s time for family day at the lake.