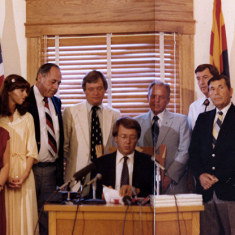 "Lead" is a verb. It means to guide, to show the way. Protecting Arizona's water future will require our elected officials to lead us forward the way past generations took charge when it mattered before.

There is no better example of the kind of leadership needed than was exhibited in the passage of the 1980 Groundwater Management Act.

In 1978, the legislature established the Groundwater Management Study Commission to craft new laws to stop the severe over-pumping of groundwater that had plagued the state for decades.  Given 50 prior years of unsuccessful attempts to manage groundwater, many thought the Commission was doomed to fail.

But Senate President Stan Turley, House Majority Leader Burton Barr, Senate Minority Leader Alfredo Gutierrez, and Governor Bruce Babbitt worked hand-in-hand in a bi-partisan, neutral effort to drive the Commission to success.  They demanded that the interested water users compromise to achieve consensus.  As Jim Bush, who represented the Arizona Mining Association in the negotiations of the Act, would later say, "You couldn't resist making some changes even if it went against your position.  You had to give in on some things. That was something I'd never faced before."

Signing of the Arizona Groundwater Management Act of 1980

The Groundwater Management Act that resulted from this leadership and compromise is a major reason Arizona is not in a crisis during this time of extended drought.

Another elected leader stepped up in 1986 when cities and others were pushing for the right to store water underground by artificial means so they could pump it back out when needed.

Senate Majority Leader Bob Usdane supported this idea, but state law had to be amended to protect the significant investments that would be required.  When the parties could not agree on the provisions to accomplish that, the Senator ordered me to his office (as Director of the Department of Water Resources), showed me to his conference table, and told me to sit down and draft a bill.  He asked only that 5 percent of all water stored be left underground permanently to help protect our groundwater supplies.  Usdane's bill, known as the Underground Storage Act, has resulted in the underground storage of nearly 9 million acre-feet of water for the future.  His leadership is yet another reason Arizona is not in a crisis despite the drought.

In 1987, Representative Larry Hawke of Tucson realized that the wasteful practice of using drinking water to fill man-made subdivision lakes so homeowners could live on waterfront property could no longer be tolerated in our desert environment.  Calling stakeholders to the basement of the House, he announced he would run a bill to ban these subdivision lakes, to the dismay of some developers.  Over a series of meetings, he personally led the parties to compromise and agree on the terms of the "Lakes Bill,” which was enacted that same year.

There are other notable examples of past leadership on water matters, including 1996 legislation establishing the Arizona Water Banking Authority to store unused Central Arizona Project water underground for use in times of future Colorado River shortages.  In the last two decades, however, most efforts to pass significant water legislation have been stymied.  Faced with conflict among water users, legislators have been reluctant to get involved.  Left to their own, the water users have failed to compromise, resulting in inaction all around.

It is clear to most Arizonans that we face serious water issues that only the legislature can address.  In areas of the state like Willcox and Kingman -  where the Groundwater Management Act does not apply - domestic wells are going dry while farmers dig deeper and deeper for dwindling supplies.  Meanwhile, funding for necessary water and wastewater infrastructure (treatment plants and pipelines) is limited or unavailable.  The state Water Infrastructure Financing Authority (WIFA) calculates that Arizona will require $7.4 billion for drinking water infrastructure and $5.2 billion for wastewater infrastructure over the next 20 years just to maintain our current capacity.  But the legislature has failed to put money in the Water Supply Development Revolving Fund that it established to provide low-interest loans to water providers to help build that infrastructure.

Addressing these and other water issues will require real leaders and leadership.  Our legislators must learn about water, bring stakeholders together, maintain neutrality and insist on compromise.  This year, the Kyl Center for Water Policy at ASU's Morrison Institute for Public Policy will initiate a Leadership Roundtable series to educate elected officials on water and engage them in crucial water policy discussions.  Named after former U.S. Senator Jon Kyl, a universally respected water expert and leader, the Kyl Center is the right organization to help build the leadership necessary to continue Arizona's legacy of sound water management.  In the mean time, Arizona citizens should get the word out that we still want and need our leaders to lead.