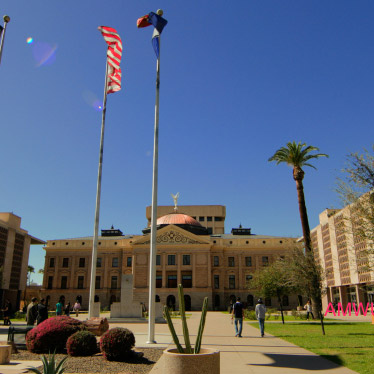 So far 2017 has been a good year for water. The Southwest had a rainy winter, an official shortage of Colorado River water appears delayed another year, and there was broad support for water issues at the Arizona Legislature. The Arizona Department of Water Resources, Salt River Project, Central Arizona Project, Southern Arizona Water Users Association, counties, water professionals, agricultural interests and environmental groups joined AMWUA to make this a good Legislative session for water. It helps that Arizona’s Governor and a growing number of lawmakers recognize that water fuels our economy.

AMWUA worked hard this year to remind lawmakers that Arizona’s economic health is dependent on reliable water supplies. AMWUA sponsored two events for lawmakers to discuss the state’s water successes and the importance of continuing to plan, manage and invest in our water supplies. In addition to these events, here are a few highlights from the 2017 session.

1. The Governor and legislators understand that the Arizona Department of Water Resources (ADWR) plays a key role in finding solutions to our current and future water challenges. To that end, AMWUA has long advocated for a well-funded water agency that can attract and retain the brightest water minds. This year ADWR received an operating budget of $15,990,100, an increase of $858,400 over last year. This modest increase will actually provide a good return for Arizona. Investing in the management of our water resources has always given us large dividends. This increase will help the agency address complex water issues facing the state. Here are just two examples:

2. The Central Arizona Water Conservation District (CAWCD) is the legal name of the entity that operates the Central Arizona Project (CAP), the 336-mile canal that delivers Colorado River water from Lake Havasu to Phoenix and Tucson. The CAWCD Board of Directors is responsible for maintaining the more than 30-year-old CAP canal. Board members also set the rates Valley cities pay to receive their Colorado River water, determine the amount of property taxes you pay for the CAP system, and establish policies to manage CAP water. The election of CAWCD board members, who serve six-year terms, has always been non-partisan. This year legislation was introduced that would have, in part, made the CAWCD election partisan. AMWUA opposed making CAWCD elections partisan and the Legislature agreed to remove that part of the bill. AMWUA continues to stand for the principle that water in the desert should be a non-partisan issue.

3. AMWUA opposed legislation that would have limited the ability of cities and counties to enter into intergovernmental agreements (IGAs) with other cities, the State, Salt River Project, Central Arizona Project (CAP), and Native American Communities for more than eight years. It would also have required a review of all existing IGAs to verify that a termination date was included. AMWUA testified that cities enter into many water agreements that last for decades to ensure they have a 100-year water supply for all new development and AMWUA cities hold long-term contracts with the Central Arizona Project to assure delivery of their Colorado River water supplies. After several meetings of the bill’s supporters and those who opposed it, no compromise emerged and the bill failed to move to House floor action.

4. AMWUA opposed legislation that would have weakened the State’s authority in managing water in Pinal County and undermined the requirement for new developments to have an assured 100-year water supply before building. This would have threatened the effectiveness of the 1980 Arizona Groundwater Management Act, a key water law that prevents the depletion of the state’s aquifers and is credited with helping Arizona survive a 20-year drought. AMWUA sent a letter to the Speaker of the House of Representative asking him to hold the bill. With key opposition also within Pinal County, the bill never received House floor action.

AMWUA will be active again next year advocating for sound water policy that builds on the 1980 Groundwater Management Act.  We do this because Valley residents and businesses recognize that managing and investing in water now means a healthy economy and a healthy way of life for their kids and grandkids. If you want to learn more, it’s all in AMWUA’s 2017 Legislative Review.