50 Years of AMWUA: Regional Committee Plants the Seeds for a Conservation Culture 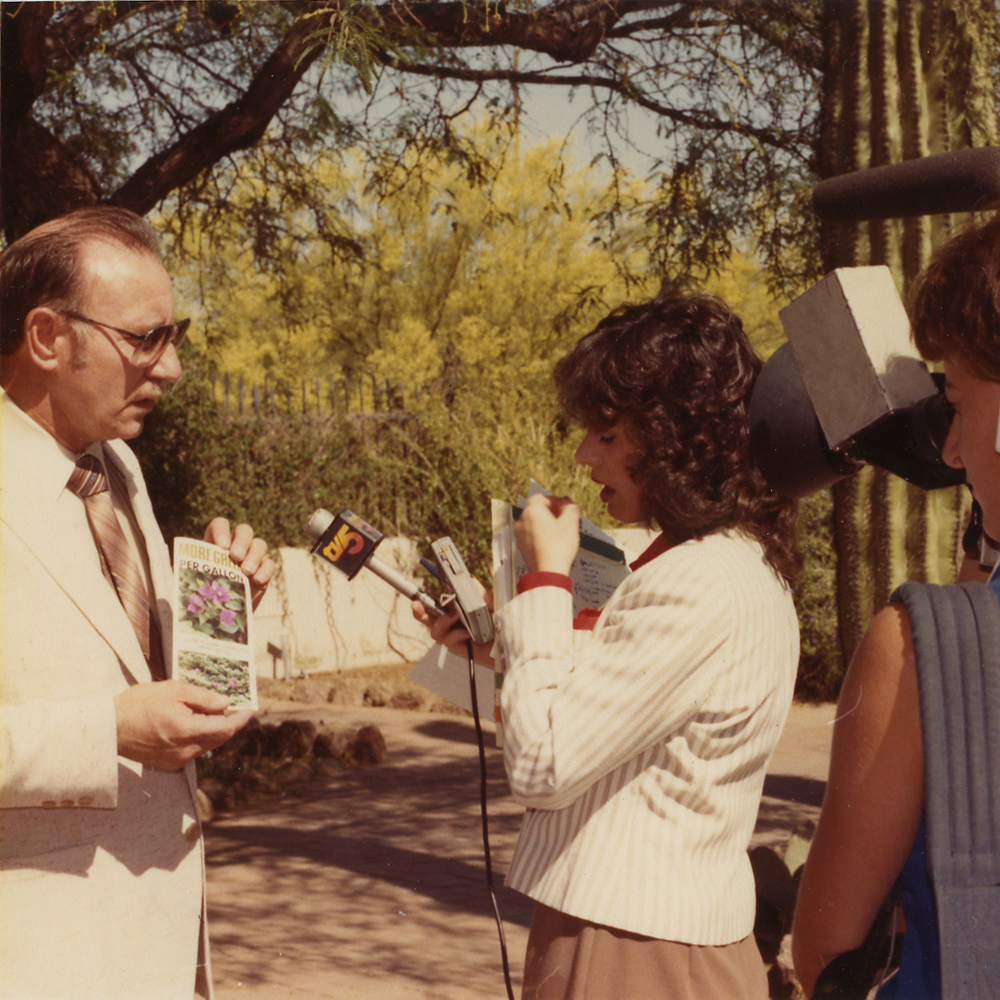 The 1980 Arizona Groundwater Management Act required water providers to reduce the amount of water used per capita. The dilemma was cities did not have water conservation staff at that time.  To tackle this state initiative, AMWUA established the Regional Water Conservation Committee to help member cities work together to develop conservation efforts.

At the time, water conservation was a relatively new field, so the cities assigned the additional responsibilities to existing staff.  Joining them at the table were representatives from Salt River Project (SRP) and Robin Stinnett from the Arizona Department of Water Resources (ADWR), the state agency responsible for writing and enforcing the regulatory management plans required by the new law.

ADWR had hired Robin in 1981 to write the management plan for the Phoenix Metro area. She had previously been a planner for the U.S. Army Corps of Engineers as well as for city and private water companies. In 1986, she left ADWR to manage AMWUA’s Regional Conservation Program for eight years.

By 1981, most AMWUA cities had already amended their plumbing codes to require water efficient fixtures.  Codes and standards would ensure that interior water use efficiency would improve.  Far more water was used in the landscape than indoors. Because of this, the management plans, which laid out the conservation requirements and the programs the cities had to undertake to achieve them, focused on reducing landscape water use.  Turf and lush landscapes were the predominant choice in the Phoenix area.  The challenge for the Conservation Committee was to change the popular preference from water intensive landscapes to climate appropriate landscapes.  That meant encouraging new residents, who were moving here by the thousands, to create landscapes that matched their desert environment and thrived in heat and low humidity.

Encouraging people to match their landscape to the environment could help cities reach their conservation mandates, but the steps to get there had to be built one-by-one. There were no guides for homeowners about what trees or plants to use in the Sonoran Desert. There were no guides to help homeowners design and care for a desert adapted yard. There were few places to buy low water use trees and plants.

The committee sought help from botanists and horticulturalists at the University of Arizona (UA). They worked with the Desert Botanical Garden and the UA Maricopa County Cooperative Extension, which was already working on a desert adapted demonstration garden. Robin led the drive to create the Conservation Committee’s first modest brochure about creating a desert adapted yard.

“The message has been the same for many decades,” Robin said. “We’d like to help you find beautiful water-efficient ways to design, install and maintain your landscape. That was always the message.”

In 1986, Arizona’s first xeriscape brochure made the news. Robin was interviewed by multiple news outlets. Despite some initial critics, retail nurseries started to introduce more low water use plants and trees to their inventories. Local wholesale nurseries specializing in desert adapted plants and trees offered an expanding palette and new varieties.  The Arizona Nursery Association (ANA) joined AMWUA as one of its most solid allies in the effort to promote desert friendly landscapes. Nurseries began distributing AMWUA’s xeriscape brochures, cities mailed them on demand, and libraries had them on hand.

The regulatory management plans restricted landscaping in medians and rights-of-way to low water use trees and plants identified in regulatory plant lists. Arizona Department of Transportation (ADOT) pioneering landscape designer LeRoy Brady attended Conservation Committee meetings and made the Valley’s expanding freeways an unlikely showcase for xeriscape design. The new street and freeway landscaping projects created immediate demand for desert adapted plants and trees. Homeowners began going to nurseries asking about the trees and plants they saw along their commutes. Landscape designers began winning prestigious awards using low water use trees and plants, and their work was featured in Phoenix Home & Garden Magazine. AMWUA and the ANA partnered to develop and implement the Plant of the Month campaign to assist retail nurseries to promote desert adapted plants.

A new vision for what the Phoenix area should look like took root.  Increasingly, homeowners chose to transform their turf yards to desert adapted landscapes.  City of Phoenix research found that 70 to 90 percent of the city’s homes had turf landscapes in the 1980s. Today, that number has dropped to approximately 15 percent.  Since 2000, the City of Phoenix grew by more than a quarter million people, yet total residential water use actually decreased by 12.5%.

In that first decade, the xeriscape brochures grew into professional landscape publications, also now online. The committee wrote and published the first guides for watering desert lawns and converting grass to a desert landscape. The committee sponsored an annual landscape design contest and an annual xeriscape conference. Members worked with the Tucson Water and UA to write a water education curriculum for middle school students and to create a desert landscape-training program for professional landscapers, called Smartscape.

“What we did together had a regional benefit, regional financial support and a regional organization to keep track of things,” Robin said.

AMWUA’s Regional Program provided a foundation and a forum for information exchange that allowed the AMWUA members to build their individual programs more efficiently and effectively.  Today, each member city has programs tailored specifically to their residents and businesses and has professionals to assist them.  AMWUA’s program focuses on projects, research, and advocacy that support all its members.

“What I liked most about this program was that we got to start it from scratch, and it was so exciting because of that. We did things that had a regional benefit, so it supplemented individual water conservation programs,” Robin said.

Collaboration has been central to the program’s success, not only between the AMWUA members, but with so many others in the community: ADWR, Bureau of Reclamation, SRP, CAP, Tucson Water, UA, Desert Botanical Garden, Project WET, ADOT, ANA, pioneering nursery wholesalers such as Mountain States Wholesale Nursery, landscape architects and designers, individual landscapers, irrigation companies, Arizona Landscape Contractors Association, Phoenix Home & Garden Magazine, other media outlets, and mostly importantly, the public.  Together, we have accomplished a daunting task—we have changed the culture of our landscapes, achieved our conservation objectives, and made our communities more resilient.